The judicial system in Iran has never fully been independent.The system is heavily influenced by outside pressures, such as political and religious power centers. The influence of religious interests has increased since 1979 Islamic revolution. 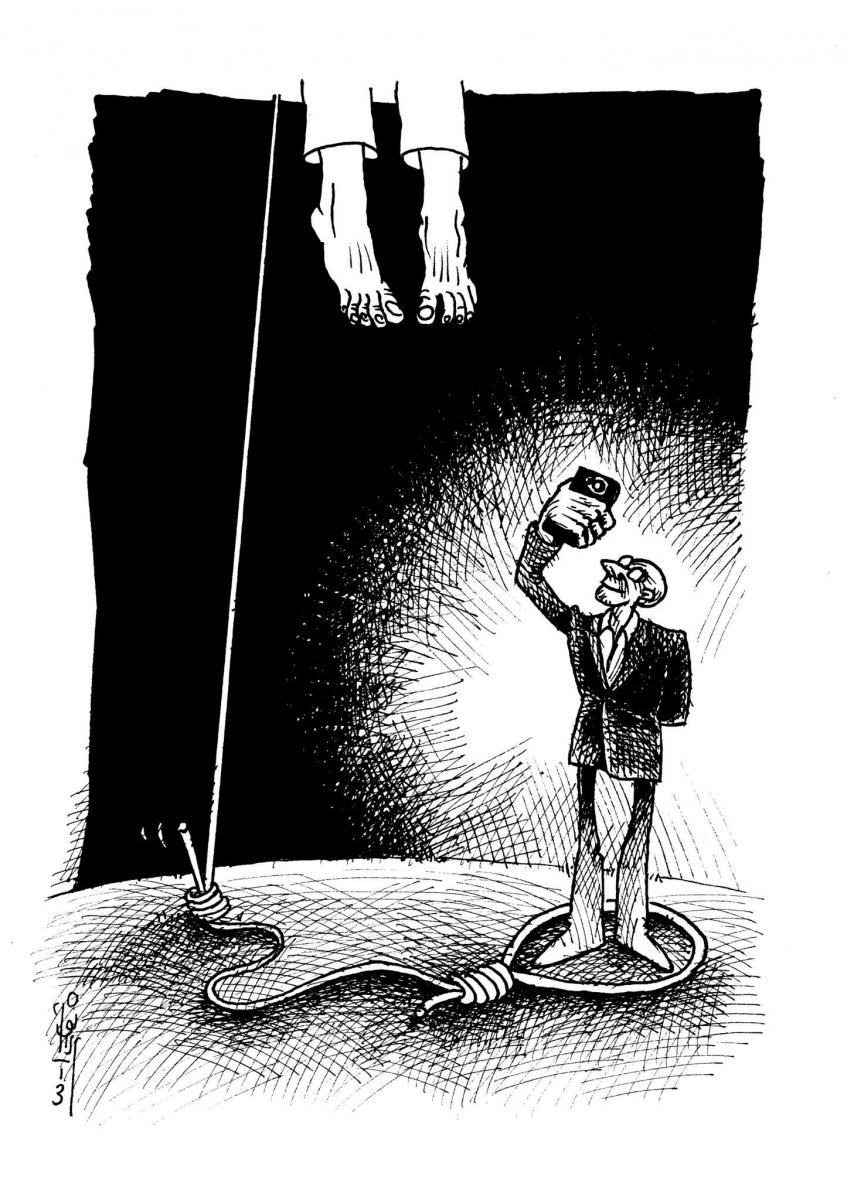 The judicial system in Iran has never fully been independent.The system is heavily influenced by outside pressures, such as political and religious power centers. The influence of religious interests has increased since 1979 Islamic revolution. Judges are accused of not being impartial and easily swayed, particularly in political cases involving influential figures, and the number of swift trials that hand down sentences of execution have raised concerns regarding due process. The October 2013 execution of 16 prisoners thought to be linked to groups hostile towards the regime raised awareness and public debate around due process and the openness and fairness of trials. The prisoners were hanged in retaliation for the killing of a group of Iranian border guards in the southeastern province of Sistan Baluchestan. Of particular note is how the use of executions in Iran falls short of international norms and standards relative to its effects on minors, the use of public and extrajudicial executions or a relative lack of due process.

The government often uses Islamic law to justify the use of the death penalty for political prisoners and prisoners of conscience, though some argue that this is based on strict interpretations of vague concepts. Moharebeh, an Islamic term that means “war against the Islamic state (or God)” is often a charge used to indict prisoners and sentence them to death. In the Islamic Republic's’ constitution, Moharebeh is understood to be an armed attack against the country; however, judges often interpret Moharebeh as any attack aimed at the Republic, armed or not. Based on IHRDC execution databased of 2012, 10 out of 12 people charged and executed for Moharebeh had been arrested originally for basic armed robbery that was not linked to political attacks on the state. And in Kurdish provinces, many individuals known to be supporters of separatist groups have been imprisoned or hanged on the charge of Moharebeh. Similarly, Arab, Kurdish, Azeri and Baluchi minorities have been sentenced to death for what many believe to be because of their different religious beliefs (all are Sunni Muslims) or cultural activities.

According to international and Iranian law, executing a minor is illegal. Iran adhered to the United Nations Convention on the Rights of the Child in 1991 and ratified it in the Parliament in 1994. Executions of minors are a violation of the commitment of the convention; however, activists note that judges often always keep minors in prison until they reach the legal age of 18, when they are then executed. Although there are no official records on the number of juvenile executions in Iran, prominent Iranian lawyer Mohammad Mostafaei estimated in an interview on Radio Farda in 2008 that 70 to 110 minor prisoners waiting for their execution as soon as they reach the age of 18. According to his estimations, between 2006 and 2008, 26 people were executed in Iran for crimes that they had committed before the age of 18.

In the international community, it is accepted and understood that neither capital punishment nor life imprisonment should be imposed on children who commit criminal offences. When Iran joined the Convention on the Rights of the Child, however, it placed a reservation on its acceptance. If the Convention is or becomes incompatible with the domestic laws and Islamic standards at any time or in any case, the Government of the Islamic Republic will not abide by it. 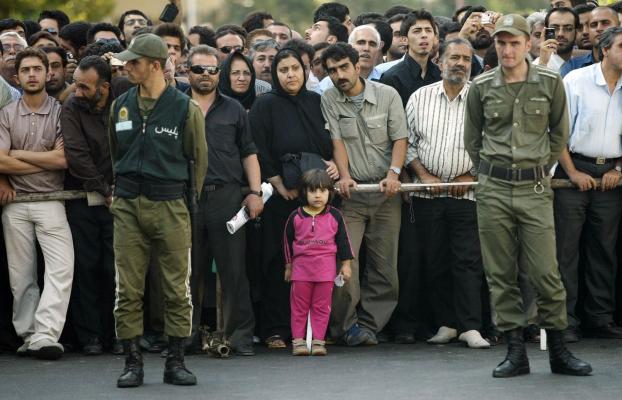 The international community began to take notice and criticize Iran for its use of public executions when a number of stoning sentences were carried out. According to Sharia law, married couples who are found guilty of adultery are stoned to death; proving guilt for such actions, however, is extremely difficult. Regardless, many Iranian judges follow the Islamic tradition that accepts a judge’s knowledge as being sufficient enough to pass a guilty verdict to justify their rulings. The case of Sakineh Mohammadi Ashtiani, an Azeri women sentenced to death by stoning for adultery and murder, reached international attention when her lawyer, Mohammad Mostafaie, started a campaign protesting her sentence. In the end, faced with such pressure, the court overturned the ruling and Ashtiani was not executed. 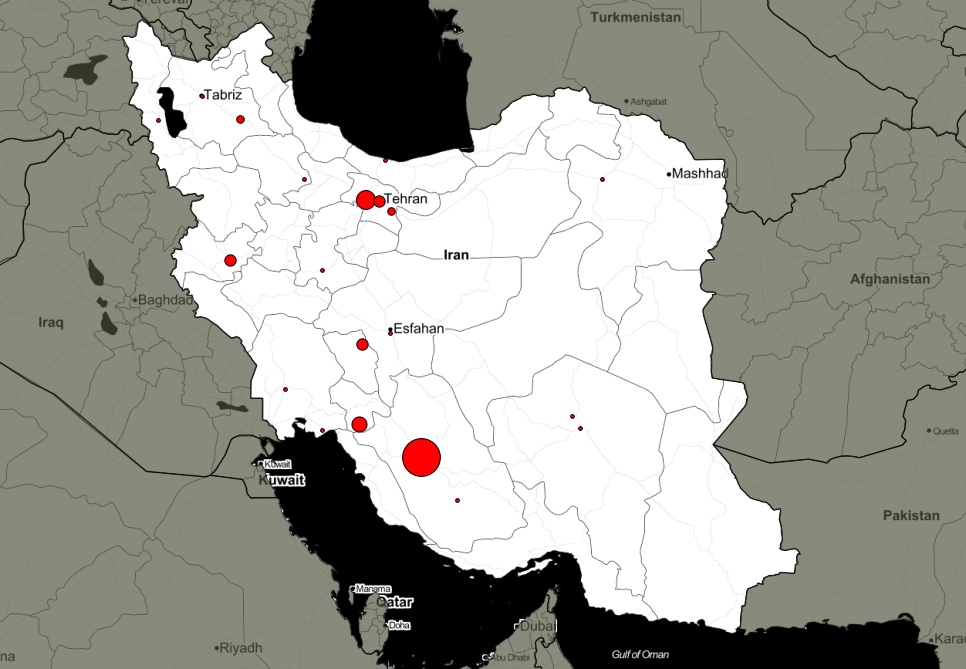 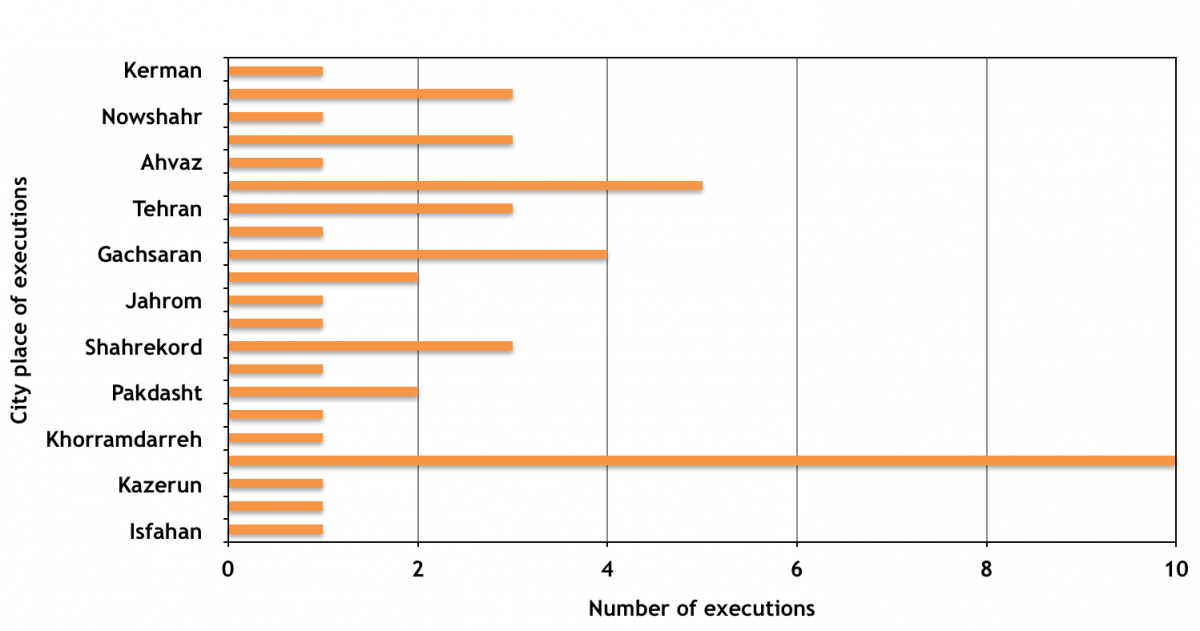 Executions in Prisons and Secret Executions

Apart from cases of public execution, capital punishment also takes place in prisons, sometimes occurring in secret. Iran has the highest ratio of death penalty cases per capita and the second highest number of executions in the world. Nabz-Iran imported and mapped 359 execution reports documented by the Iran Human Rights Documentation Center that took place in the first three quarters of 2013. According to the data (see the chart below), the city of Karaj had the highest number of executions in all of Iran, with 63 executions during the three-quarter period. The next highest was the city of Zahedan, with 29 executions, and then the city of Shiraz followed close behind with 26 executions.

Iran is located at the epicenter of drug trafficking routes. With Afghanistan and the loosely controlled borders of Pakistan to the east, post-Soviet republics in the north and Iraq to the west, the Iranian government believes that the threat of the death penalty is the easiest way to eliminate drugs from entering Iran. With 180 cases, drug trafficking holds the number one spot on the list of charges for executions in the first three quarters of 2013. Within this context and beyond the question of efficacy, the lack of due process - specifically access to legal representation, confessions under duress, swift trials, retaliatory executions among tribes, and the lack of transparency in the judicial process - is alarming to human rights activists.

The map documenting executions from 2012 (as catalogued by the IHRDC), reveals a pattern of executions taking place along the border with Afghanistan. The counties along the border are witness to high levels of drug smuggling; as such, Iran has responded by positioning police to intercept smugglers coming in from its eastern border. According to Iran’s anti-drug laws, if the cumulative weight of drugs exceeds 5 kilograms, the person caught smuggling the drugs should face the death penalty.

The sheer number of executions taking place in Iranian prisons - 2,411 cases in the ten years between 2000 and 2010, according to official media - has also raised flags among members of the human rights and international community. According to some reports, from the city of Mashhad in particular, many prisoners have been executed secretly without the executions being formally announced or without an understanding of their charges. Statistics regarding political executions are unclear, particularly because of the suspicion around secret executions taking place in prisons across Iran. Ahmed Shaheed, the UN Special Rapporteur on Human Rights in Iran, outlined in his 2011 annual report that more than 300 prisoners were secretly executed in Vakilabad prison in the city of Mashhad.

The execution of underaged criminals, the lack of due process and the execution of prisoners for their political and/or religious affiliations, among other issues, have raised concerns among Iranian activists as well as in the international community. The Iranian government insists on maintaining its practice of capital punishment; since Hassan Rouhani was inaugurated as president in August 2013, reports indicate that the rate of executions has increased, with more than 125 executions between August and October 2013.

According to data, extrajudicial, political and public executions do not seem to be addressing crime rates in the country. Could they be contributing to an increasingly violent context? As Naser Khosro, a famous eleventh-century Iranian poet, put it in verse:

“Dead man, whom have you killed that caused you to be killed like this, and will someone kill the one who has killed you?”

Maybe if there is the tolerance and moderation that the new government is touting, it would be a good time to revisit the question of capital punishment in the country as well. 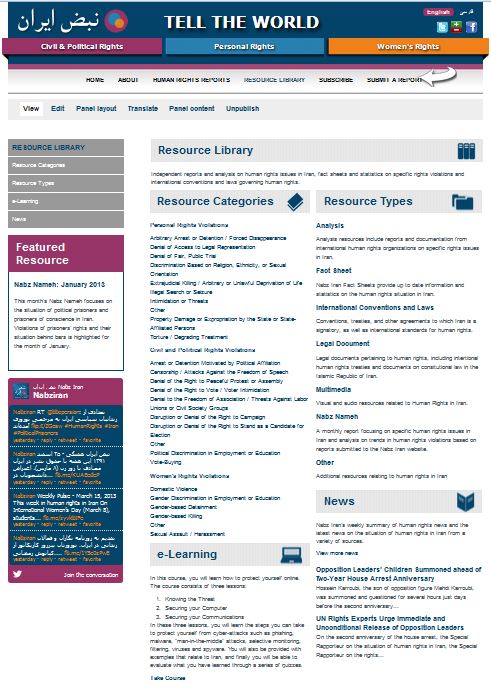 The Resource Library is a growing database of useful materials, including: UN treaties, declarations and conventions Iran has signed; legal documents, including the Iranian constitution and relevant Iranian laws; reports from non-governmental organizations (NGOs); fact sheets on the status of Iran's international obligations; and other material related to the human rights situation in Iran.

The new Accountability page of the Nabz-Iran site provides users with e-learning courses, resources, infographics and much more in order to help inform and guide them in monitoring and advocating on accountability issues.

Nabz-Iran is an Iranian-led group effort. Iranians from within Iran and among the diaspora contribute reports on human rights to the site based on personal experience, testimony from other Iranians, and media sources. The site seeks to amplify Iranian voices and draw international attention to their cause. On the site, you can find: a map of rights violations, categorized by women's rights, political rights and human rights, and up-to-date news and analysis on human rights.