On March 8th women will be celebrated in many countries for their achievements and the crucial role they play in creating a more equitable and free world. Iranian women, like their counterparts across the world, have and continue to strive for the betterment of their society.

On March 8th women will be celebrated in many countries for their achievements and the crucial role they play in creating a more equitable and free world. Iranian women, like their counterparts across the world, have and continue to strive for the betterment of their society. In commemoration of International Women's day, this issue of the Nabz Nameh examines the important mark that Iranian women have left on their country and their efforts moving forward within the current socio-political environment in Iran.

The Legacy of Iranian Women

Iranian women have a strong legacy of social and political activism. The Constitutional Revolution of 1905-1911 saw women collectively enter the public sphere in mass sit ins and demonstrations against the rule of the Qajar monarchy and the outset of a vocal movement towards the formal education of girls and women. In 1952, under the government of prime minister Mohammad Mosadegh, the participation of women in the country’s political discussions led to the right of women to vote in municipal elections. This paved the way for the right of women to vote and run for parliament in the national election in 1963, followed by a series of progressive reforms in favor of women’s rights, most notably the Family Protection Laws of 1967 and 1975.

Iranian women were at the forefront of demonstrations leading to the toppling of the Pahlavi regime in 1979 and the establishment of the Islamic Republic of Iran. Many women were imprisoned and persecuted alongside men by the new regime for their political activities. Legal rights that Iranian women worked so hard to gain were curtailed with the installation of Islamic shari’a law as the basis of the new legal system. Despite these setbacks and a cultural campaign by authorities to glorify the role of women in the domestic sphere and exclude them from the public domain, Iranian women continued to strive to maintain active roles in public life. Ironically, the implementation of a mandatory hijab created morally acceptable public spaces for women from more traditional backgrounds to safely establish a presence in public life, creating an opening for these women to enter discussions about the status of women under the new regime. The eight-year Iran-Iraq War from 1980 to 1988 and the resulting pressure on the Iran’s economy also created another opening for women to establish a public presence under the new regime, in spite of the State’s official stance. The war drained the Iranian labor force of young men and by the mid eighties women were encouraged to enter the labor force as a means of filling the gap and alleviating the economic strain of war. In the years since, Iranian women, both secular and religious have worked hard to overcome social and legal barriers and to remain active citizens in their communities.

“All citizens of the country, both men and women, equally enjoy the protection of the law and enjoy all human, political, economic, social, and cultural rights, in conformity with Islamic criteria.”

-Article 20 of the Iranian constitution

The introduction of a number of gender policies rooted in shari’a law by the Islamic Republic led to a reversal of rights previously granted to Iranian women, namely impacting family and inheritance laws, employment laws and penal codes. The Family Protection Law of 1967, which granted women equal rights in marriage, divorce and child custody proceedings, was removed on the basis that the laws were in contradiction with shari’a law. As a result of pressure from women’s rights advocates, an amendment to divorce regulations was made in 1992, reinstating some rights to women in divorce proceedings, including the right to financial support and compensation in divorce.

During the administration of reformist president Mohammad Khatami, Iran’s civil society benefited from a slight relaxation of restrictions. Many activists used this opportunity to connect with like-minded citizens on issues impacting their lives. With the end of Khatami’s presidency and the resurgence of Iran’s hardliners under president Mahmoud Ahmadinejad, the One Million Signature Campaign was launched by Iranian women’s rights activists with the aim of educating Iranian women of their rights under the country’s legal system. The campaign enjoyed the support of both Iranian men and women and captured the attention of the international community. Sadly, members of the campaign, including prominent figures such as Parvin Ardalan, Sussan Tahmasebi and Bahareh Hedayat were persecuted under Ahmadinejad’s government, leading to a curtailing of the campaign’s activities. 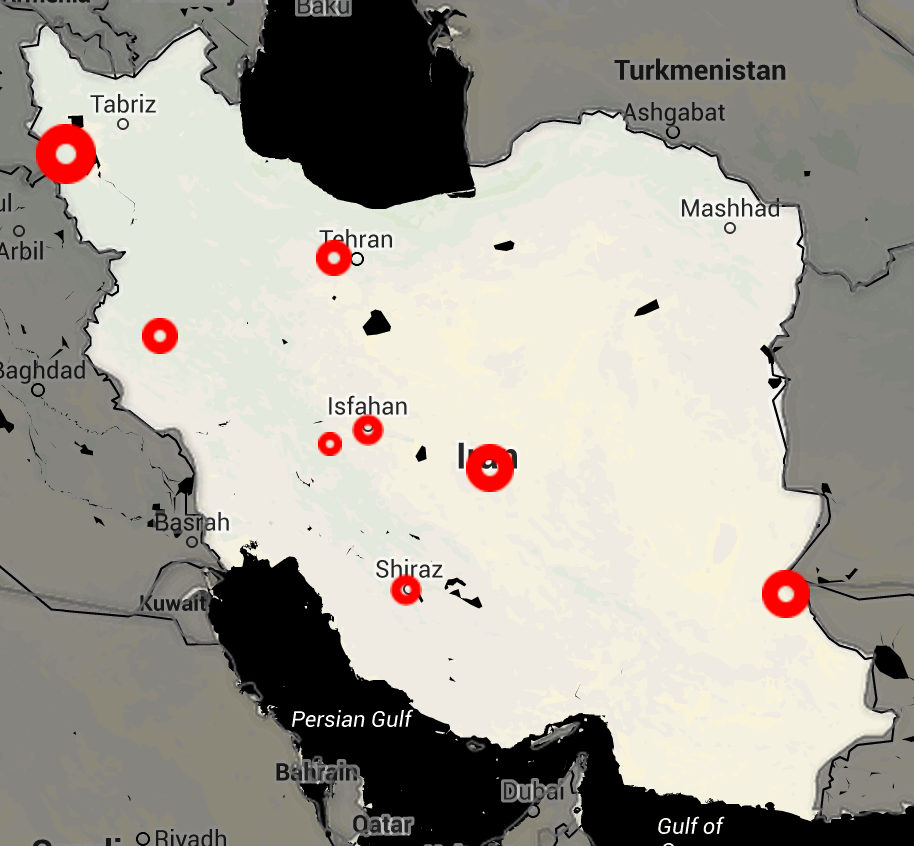 To see the internactive map, click on the image
Execution data collected by IHRDC

Ahmadinejad’s administration oversaw further setbacks to women rights. The Family Protection Law adopted in 2008 favored the rights of men in polygamous and temporary marriages and again scrapped the rights of women in divorce proceedings. Measures were introduced to restrict or ban women from enrolling in certain academic fields in universities and to create gender segregation in classes. The prominent and popular women’s publication Zanan, publishing for sixteen years, was also shut down under the accusation that the publication was promoting a negative image of Iranian women and, therefore, damaging the moral fabric of society.

The election of President Hassan Rouhani in June of 2013 brought some sense of hope among many Iranians of an easing of social and political restrictions, enforced ruthlessly by the previous government. Thus far, Rouhani’s administration has taken action to represent women in decision making positions by appointing Elham Aminzadeh as vice president of legal affairs, Marzieh Afkham as Iran’s first Foreign Ministry spokeswoman and Iran’s former vice president Ebtekar as Head of Environmental Protection Organization. Yet despite Rouhani’s public promises to support the advancement of women’s rights by, for example, backing more employment opportunities for women and ending the gender segregation policy in universities, no concrete substantive progress has been made to date. In fact, the Comprehensive Population and Family Excellence Plan, family planning legislation presented under the Rouhani administration, only serves to stifle the advancement of women’s rights. The legislation aims to increase population growth by, among other things, restricting women’s access to contraception and limiting employment and educational opportunities for women, single women in particular.

Through historic achievements and despite setbacks alike, Iranian women today have managed to establish a significant and dynamic role within modern Iran. What role, then, will Iranian women play in the future of Iran? All signs point to the notion that Iranian women, like their male counterparts, desire a life as active citizens under a system that ensures and promotes their fundamental rights.

With a seemingly progressive attitude held within the Rouhani administration, perhaps now is the time for Iran’s social and political actors to recognize the significant role in which Iranian women can play in building a future Iran. This begins with a commitment to respect and promote the fundamental rights of Iranian women in tandem with measures to ensure women’s active participation in the country’s social and political processes. Rouhani’s government should allow space for civil society groups, particularly women’s groups, to freely meet to discuss issues and form collaborations. Only by working closely with these groups and including women in the country’s decision making processes can the government take steps towards positive change. The Rouhani administration should also urge Iran’s Guardian Council to approve the country’s accession to the Convention of the Elimination of All Forms of Discrimination Against Women (CEDAW). A bill in favor of accession to CEDAW was approved by the Majlis in 2003, but was subsequently rejected by the Guardian Council on the basis that the Convention would breach Islamic rules and values.

What do you think is the greatest challenge currently facing women in Iran? In what ways do you see Iranian women contributing to a future Iran? Raise your voice by sharing your point of view on Nabz-Iran and join the discussion on women’s rights in Iran. 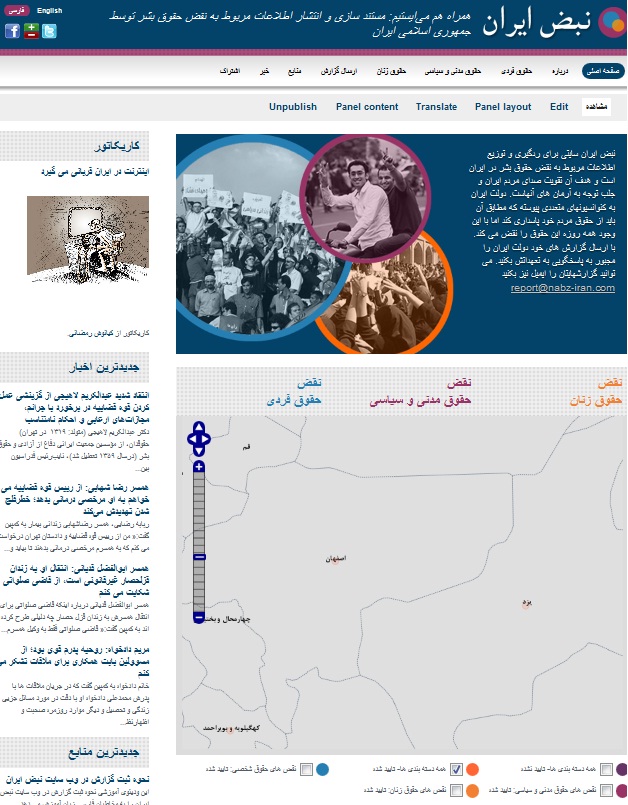 The Resource Library is a growing database of useful materials, including: UN treaties, declarations and conventions Iran has signed; legal documents, including the Iranian constitution and relevant Iranian laws; reports from non-governmental organizations (NGOs); fact sheets on the status of Iran's international obligations; and other material related to the human rights situation in Iran.

Nabz-Iran is an initiative seeking to amplify Iranian voices and support efforts for the citizens of Iran to assert their rights. Through an online platform, the initiative culls information from Iranian media sources, personal networks and on-the-ground witnesses and provides resources and analysis of legislation and international agreements to which Iran is a signatory, including analysis on election laws, human rights reports from leading international organizations and fact sheets on the international standards. The site seeks to amplify the voices of Iranian activists by collecting, mapping, and sharing information on rights conditions in Iran while creating a venue for Iranians to share their stories. In addition, the initiative develops and provides resources and training materials to help strengthen the ability of Iranians to advocate for greater accountability and related political reforms.