The challenges and rights violations faced by Bahá’ís in Iran are not a new theme. These difficult conditions began in the Qajar era and have been exacerbated since the Islamic Revolution in 1979 with the introduction of Sharia law into the Iranian Constitution, in which the Bahá’í Faith is not recognized as an official religion. Despite Hassan Rouhani’s election and promises to formally recognize the various branches of Islam, there seems to be no substantial change forthcoming in the situation of Bahá’ís in Iran.

The Rights Situation of Bahá’ís in Iran

The challenges and rights violations faced by Bahá’ís in Iran are not a new theme. These difficult conditions began in the Qajar era and have been exacerbated since the Islamic Revolution in 1979 with the introduction of Sharia law into the Iranian Constitution, in which the Bahá’í Faith is not recognized as an official religion. Despite Hassan Rouhani’s election and promises to formally recognize the various branches of Islam, there seems to be no substantial change forthcoming in the situation of Bahá’ís in Iran.

Among the most significant difficulties for the Iranian Bahá’í community is the right to education for young Bahá’ís. At all levels of education, from primary school through university in particular, if the term “Bahá’í” is mentioned in any document or if the faith of a Bahá’í student is revealed, the student and his or her family are referred to the school or university’s religious offices for investigation. In most cases, these investigations result in the expulsion of the student.

In the Bahá’í Faith, taqiya does not exist, meaning that Bahá’ís are not supposed to lie or hide the truth—even when fearing for their well-being or lives—or else they are expelled from the Faith. This is one of the principles of the Bahá’í Faith, and Iranian Bahá’ís are forced to struggle with a dual existence on a daily basis in order to maintain their basic human rights.

According to field research conducted after the Revolution, even after entering university, many Bahá’ís compelled to fill in “Shia Muslim” in their university entrance examination forms have been expelled upon revelation of their faith. Intelligence and university officials have clearly and directly stated that the religious beliefs of these students have been the reason for their expulsion. The only guarantee for primary civil rights that the Iranian government has provided for Bahá’ís is for them to convert to Islam. 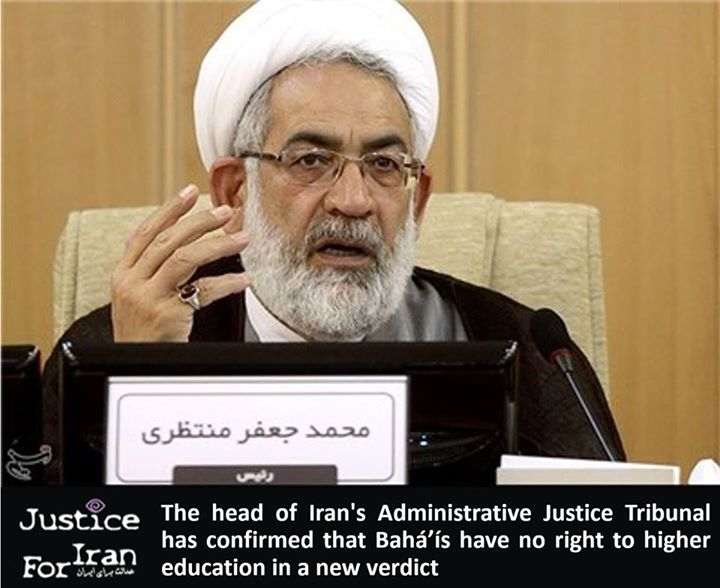 February 10, 2015: The head of Iran’s Administrative Justice Tribunal confirmed that Bahá’ís in Iran have no right to education.
Source: Justice for Iran

Historical documents and research on the formation and development of the Bahá’í Faith in Iran are very limited or destroyed altogether due to the censorship and restrictions enacted by the governments of the Qajar and Pahlavi dynasties and the Islamic Republic. As a result, history textbooks used at all levels of the Iranian educational system describe the Bahá’í Faith as a “perverse sect devised by Britain and Zionism”, with no explanation or room for inquiry. It appears that this practice, which breeds animosity between Muslim and Bahá’í children at an early stage, has become the Islamic Republic's educational policy of sorts, and from childhood on, Bahá’ís lead a dual existence, in fear of their identities being exposed. This practice seems intended to drive the Iranian Bahá’í community out of its homeland.

The establishment of the Bahá'í Institute for Higher Education (BIHE) in 1987 by Bahá’í and human rights activists outside Iran was a solution for the educational problems of the community inside the country. However, BIHE degrees are not recognized within the Iranian educational establishment, and for Iranian Bahá’ís who do not wish to emigrate, space for life, education, and work is narrowing.

Last year, an Iranian Bahá’í high school student with excellent marks conducted an interview with three members of Majles regarding his right to a university education as an Iranian. The only solution proffered by the parliamentarians was for the student to convert to Islam, and all three stated clearly that Bahá’ís in Iran do not have rights as citizens. They told the Bahá’í student that he can pursue his education at special universities for Bahá’ís and to leave Iran.

The Rights and Role of Bahá’í Women in Muslim Society, from Origins to Present

From the beginnings of the establishment of the Báb, and afterwards, the Bahá’í Faith in Iran, the freedom, independence, and role of Bahá’í women have been a constant point of attention and admiration for Iranian intellectuals.

Qurratu l-`Ayn, or Tahere, whose memoirs, poems, and speeches had a religious aspect to them, is nevertheless always remembered as the first woman who cast aside the hijab, as a triumphant public speaker, as a poet and expert in religious matters, and for her spiritual journey that ended in tragedy when she was hanged in Tehran. Her leadership as an Iranian woman in the initiative for equality of rights and freedom for women from the Bahá’í, Muslim, and other faiths is undeniable. 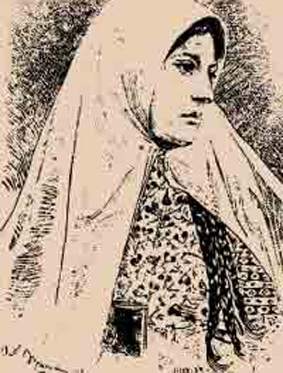 According to documents available in Dr. Afsaneh Najmabadi’s “Women's Worlds in Qajar Iran Digital Archive”, in all Iranian cities and villages with a Bahá’í population in the Qajar period and later, at a time when Muslim women had no right to education beyond a few years of primary schooling, Bahá’í women were educated even in secret, and in many cases they themselves would set up special classes for both Bahá’í and Muslim women.

For example, in the city of Sang-e Sar in Semnan province, the only pre-Revolution girls’ school was administered by a Bahá’í woman, and all the women in this traditional Muslim city completed their primary education in her class.

Bahá’í women have demonstrated undeniable influence and leadership in the fields of education, dance, music, and group singing. Although exact statistics are unavailable, field research conducted among many Bahá’í and Muslim families in various cities in Iran shows that the independence and unique way of thinking of Bahá’í women has left a mark on the receptiveness and open-mindedness of future generations of Iranian women.

The Rights Situation of Bahá’í Women after the Islamic Revolution

With increasing control over all facets of society by conservative religious elements and the suppression of dissenting voices, freedom of expression vanished quickly in Iran after the Revolution. And as the ideological identity of the new Iranian regime solidified during the Iran-Iraq War, civil society also fell victim to the new system that swiftly punished any deviation from the status quo.

According to unofficial figures and reports, during the Iran-Iraq War, Bahá’ís were called upon to participate in the war as Iranian citizens, but after the war, their rights as citizens were ignored and denied. Due to their religion, Bahá’í women whose husbands were killed in the war received no compensation from the government. During and after the war, when the arrests, detentions, and expulsions of Iranian Bahá’ís began, Bahá’í women played a tremendous role in the continued survival of their community in Iran. Women whose husbands were executed, imprisoned, or dismissed from their jobs, maintained their and their families’ subsistence by engaging in limited work in various areas of the private and public sectors, to the extent that their identities as Baha’is were not revealed.

Meanwhile, after the severe deprivations of education and employment of the 1980s, the Bahá’í community explored different ways to educate its own, efforts which in 1987 resulted in the establishment of the BIHE, many of whose professors are Bahá’í women.

The Islamic Revolution and the Islamic Republic’s promotion of the rumor that the Bahá’í Faith is a British invention have fueled animosity between Muslims and Bahá’ís. Since the Revolution, due to innumerable pressures on and difficulties for Bahá’ís, there is less coverage of and information on Bahá’í women, their role in society, and how they live and work. But at a quick glance, a basic comparison between a Muslim family and a Bahá’í one in a given city can shed light on their differences in outlook, activities and cultural independence.

Thanks to increased social liberties under the administration of President Mohammad Khatami, Bahá’ís were given permission to acquire temporary legal passports, and under the presidency of Mahmoud Ahmadinejad, Bahá’ís were allowed for the first time to obtain permanent passports like other Iranian citizens, though on the precondition that they leave the country for good.

The Bahá’í community is forced to pursue self-employment and faced with limited work opportunities. Living and studying under the cloud of secrecy and the fear of revealed identities, imprisonment, or banishment from their own country are among the daily challenges for Iranian Bahá’ís. Minority rights and human rights activists have been unable to find a solution to improve these conditions.

The members of this community, for whom exact figures on population are lacking due to their lives of secrecy and emigration, have a rich culture of education, teaching, and intellect in Iran. They are an asset for Iran, but without basic human and civil rights in their own country, they are marginalized instead. Bahá’í women, through their leadership in many cultural and educational areas, played a major role in the development and advancement of their society. Perhaps if Bahá’ís enjoyed the same rights as other Iranians, their intellectual capital would be applied toward greater advances in Iranian society, particularly in the improvement of the role of women. The Bahá’í community, despite severe restrictions and repression, continues its social engagement under cover. For example, to fulfil the teachings of their faith, Bahá’ís engage in charity work for impoverished and refugee Afghans residing in Iran. This work includes providing schooling for Afghan children who lack the documents necessary for enrolment in Iranian schools, and distributing food and clothing among the poor.

For more information on human rights in Iran, visit www.nabz-iran.com or visit the Nabz-Iran resource library. The Nabz-Iran Resource library is a growing database of useful materials, including: UN treaties, declarations and conventions Iran has signed; legal documents, including the Iranian constitution and relevant Iranian laws; reports from non-governmental organizations (CSOs); fact sheets on the status of Iran's international obligations; and other material related to the human rights situation in Iran.

Nabz-Iran, or "Pulse of Iran", is a secure platform for amplifying Iranian voices by collecting, mapping, sharing and prompting discussion on information related to various rights in Iran. We also provide resources and training materials to help Iranians advocate for greater accountability and related reforms. Information on Nabz-Iran comes from individual contributors and partner groups, and is gathered through on-the-ground witnesses, personal and professional networks and Iranian media sources. Resources on the platform include online courses for building monitoring and advocacy skills, maps and other infographics presenting data, analysis of legislation and international agreements to which Iran is a signatory, manuals and guides to support activists, multimedia components to spark dialogue and conversations, and more. Nabz-Iran does not advocate directly for specific policies and partners with a wide range of Iranian activists and international organizations to promote experience sharing, skills development and dialogue. We do not accept any funding that is tied to a particular political party or faction, requires support for a particular governmental policy, or otherwise compromises Nabz-Iran's independence.

If you would like to contribute to Nabz-Iran, please Share Your Story or send an email to [email protected]. To subscribe to Nabz-Iran and receive periodic updates on rights issues in the Islamic Republic and other resources, please visit the Subscribe page.