On April 14, the US State Department published its annual Country Reports on Human Rights Practices, which includes coverage of continued human rights violations in Iran. According to this report, over the last year arbitrary executions have continued in Iran and a total of 964 individuals were executed.

On April 12, two hours before the start of the Iran Marathon in Shiraz, Mahsa Torabi ran the equivalent distance of 42 kilometers to protest being barred from participating in the marathon as a woman.

On April 19, Amnesty International called for action in the case of Ismail Abdi, secretary general of Iran’s Teachers’ Trade Association. Abdi was arrested for his union activities and sentenced to 16 years in prison for charges such as propaganda against the regime and “gathering and colluding to commit crimes against national security”.

On April 20, Reporters Without Borders published its annual World Press Freedom Index, according to which Iran ranks 169th out of 179 countries globally. This report labels Iran as one of the most oppressive countries as far as freedom of press and journalism.

The same day, news emerged from Iran that Sabri Hassanpour, host of a Farsi-language television program in the Netherlands, was arrested upon returning to Iran. The television network is called “Sima-ye Rahaei” and broadcasts pieces that are critical of the Islamic Republic.

On April 18, in a rare move, the attorney general of Zanjan issued a warrant for the arrest of the city’s mayor over the death of a six-year-old boy who fell into a deep well that had no covering. The attorney general arrested the head of the local area and the mayor of the city itself as the highest officials responsible for this incident. He announced that the mayor had previously been warned about this issue.

On April 18, law enforcement in Tehran stopped a gathering in front of the Afghan Embassy in solidarity with the family of Setayesh, an Afghan girl who had been gruesomely murdered several days earlier by a neighbor. The murder of six-year-old Setayesh in Varamin sparked protests in Afghanistan against the lack of attention by judicial authorities to the cases of Afghans in Iran. Farsi-language social media was likewise full of sympathy for Setayesh’s family in the following days.

On April 18, the police announced that a “7,000-strong undercover morality police force” will be deployed in Tehran to track and report immoral behavior, including improper veiling, sexual harassment, and noise pollution. This announcement has drawn protest from some civic and political activists and from President Hassan Rouhani himself. Nabz-Iran asked its social media followers: “Given the reduction of the police budget, wouldn’t allocating funds for this result in decreased capacity for law enforcement to guarantee people’s safety in Tehran?”

On April 12, PEN International called on Iranian officials to free Narges Mohammadi, a journalist imprisoned in Evin Prison. After some months, Mohammadi was recently allowed to speak with her children over the phone.

On April 13, it was announced that a new case was opened against Ayatollah Hossein Kazemini Borujerdi, who has been in Evin Prison for 11 years without furlough or access to medical treatment, despite suffering from various illnesses. Kazemini Borujerdi was arrested and imprisoned for his opposition to the velayat-e faqih, or the guardianship of the jurist (the Islamic governing system of Iran).

The same day, Mehdi Karroubi published an open letter to Rouhani. Karroubi, one of the leaders of the Green Movement who has been under house arrest for several years, called on Rouhani to work toward organizing a public trial for him. According to the Iranian Constitution, individuals charged with political crimes must be tried publicly and in the presence of a jury. Karroubi’s letter was shared widely on social networks and Iranian media outside the country. On April 18, Ali Motahari, a member of parliament from Tehran, stated that the president is responsible for finding an end to the house arrest of the Green Movement leaders.

On April 14, well-known Iranian lawyer Mohammad Seifzadeh gave an interview in which he detailed the condition of political prisoners in Iran. Seifzadeh was released from prison last month after serving a five-year sentence for taking on the defense of political prisoners’ cases. In the interview, Seifzadeh pointed to issues such as “inadequate nutrition, unsanitary prison conditions, signal jamming against mobile phones, delays in transferring ill prisoners to the hospital, lack of time outdoors.”

On April 15, it was announced that the health condition of Hossein Ronaghi Maleki, a political prisoner in Evin Prison, is critical. Ronaghi Maleki has been on a hunger strike to protest his lack of access to medical care.

On April 16, it was announced that Omid Kokabee, another political prisoner in Evin Prison, is suffering from kidney cancer. Kokabee was a doctoral student in the United States who was arrested after traveling to Iran to see his family. After declining to help Iran’s nuclear program, he was sentenced to 10 years in prison. According to reports from Iran, prison doctors have removed one of his kidneys. Over the past week, Twitter users called on the Iranian government to release Kokabee.

On April 17, HRANA published a call to action to help Afshin Sohrabzadeh, another political prisoner suffering from colon cancer and who cannot afford his bail or the required medical expenses. HRANA called on Iranian citizens to help Sohrabzadeh.

On April 18, journalist and former political prisoner Saeed Razavi Faghih wrote an open letter to the EU’s High Representative for Foreign Affairs and Security Policy Federica Mogherini, asking her to extend her trip to Iran by one day in order to visit the country’s prisons. Razavi Faghih has been released from prison a few days earlier. Mogherini’s visit to Iran has drawn various requests from inside and outside Iran regarding her underscoring of human rights principles in Iran.

On April 19, Hossein Gholami-Azar, a cleric imprisoned in Evin Prison, was transferred to the hospital after being beaten by prison authorities. Gholami-Azar was on the sixteenth day of a hunger strike protesting injustices in the Iranian judicial system. 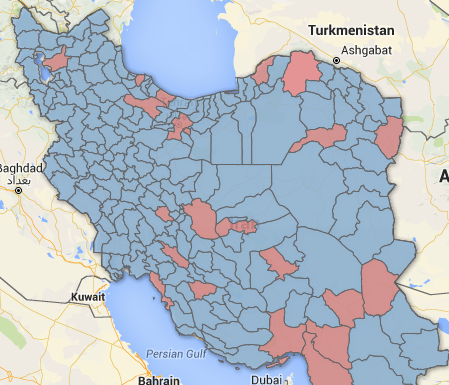 With the official start of campaigning for the second round of Majles elections, a new issue of the Nabz-Nameh has been published under the title of “The Composition of the Tenth Majles and the Geography of Political Bases in Iran”. This edition of the Nabz-Nameh uses maps of Iran’s electoral districts to review the results of the first round of elections. For instance, by drawing out the geographical influence of the different political alignments participating in the elections, it looks at their social bases in the various parts of the country. This Nabz-Nameh also examines the situations where the unfair distribution of Majles seats disadvantaged the Hope List or the Principlists.

The same day, eight prisoners in the province of Golestan were pardoned by the plaintiffs and spared execution after the mediation of certain philanthropists.

On April 15, the U.N. Commission on Human Rights called for a temporary cease to death sentences in Iran. The Commission asked the Islamic Republic of Iran to wait until the Majles votes on the repeal of death sentences for drug smuggling and halt the execution of those on death row.