There continue to be reactions to the rejection of candidacy of a reformist candidate from Isfahan after she won a seat in the election. Even though the Guardian Council has not officially announced a rejection of candidacy for Minoo Khaleghi, she has apparently been informed of the decision. Various officials from the Rouhani administration have called the Guardian Council’s action heresy and a double standard. On April 4, Mohammad Hossein Moghimi, the interior minister’s political deputy, said in an interview that the candidates’ credentials must be approved by the members of the Majles, not the Guardian Council. In Iran, after a new Majles is elected, it holds a session to review and approve the credentials of the elected representatives.

Recently a number of female Air France flight attendants have protested against the obligatory hijab on Iran-bound flights. Air France responded by making it optional for female flight attendants to work on routes to Iran. Meanwhile, the site “Stealthy Freedoms of Iranian Women” launched a new campaign asking foreign women visiting Iran to take photos of themselves without the hijab while in Iran and to submit the pictures to the campaign. Iran is one of the few Muslim-majority countries that enforce the hijab for non-Muslim and foreign women.

On March 30, Amnesty International announced that Yousef Kakehmami, a Kurdish political prisoner in Urmia Prison, was sentenced to an additional five years in prison for writing a letter to Ahmed Shaheed, the U.N. Special Rapporteur on the Situation of Human Rights in Iran. In his letter, Kakehmami protested his trial and his living conditions in prison. Amnesty International published a statement asking the Iranian government to respect the rights of prisoners, including their right to freely express themselves in corresponding with international officials.

The same day, the mother of political prisoner Hossein Ronaghi Maleki reported that her son is on a hunger strike in Evin Prison to protest his lack of access to medical care. In an April 4 letter to Major General Jafari, commander of the IRGC, Ronaghi Maleki protested the “injustices and illicit activities of the IRGC’s intelligence unit.”

Human rights organizations recently reported on the condition of Kurdish political prisoner Osman Mostafapour, who has been denied furlough for 25 years (normally, prisoners in Iran are granted it). In 1991, Mostafapour was sentenced to 25 years in prison on the charge of collaborating with the Kurdistan Democratic Party, and in another case against him, to 10 years for accessory to murder. 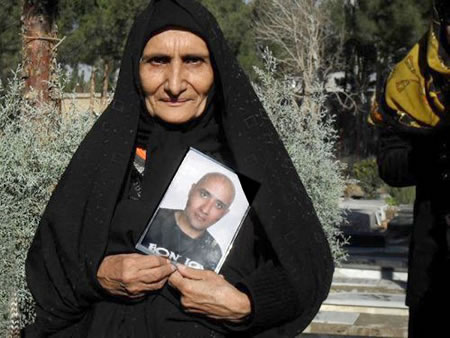 On April 6, Gohar Eshghi, mother of Sattar Beheshti, was admitted to the psychiatric ward of Rasoul Akram Hospital after suffering an anxiety attack. Beheshti was a worker in Tehran who was arrested for his writings on his personal blog and who died under police torture. Ever since, Eshghi’s efforts to identify the authorities responsible for her son’s death and bring them to court have been unsuccessful.

On April 7, the bookstore Toranjestan and the pastry shops Faranseh and Vorta were shut down in Tehran, apparently for displaying the heart symbol on the packaging of some of their products. Recently police officials in Iran have announced that displaying hearts on products for sale is forbidden because it promotes Western culture. This restriction is particularly more frequently announced near Valentine’s Day.

On April 4, the provincial judiciary of Sistan and Baluchestan announced criminal charges against Shahindokht Molaverdi, vice president for women’s and family affairs. Molaverdi recently stated that there is a village in Sistan in which all the men of the village have been executed for crimes related to smuggling, and that families in this village need support or otherwise their children will turn to smuggling criminality in the future. The judiciary of Sistan and Baluchestan announced that Molaverdi’s statements are “falsehoods spread to disturb public opinion” and that they amount to a crime.

On April 8, Amnesty International reported the imminent execution of Rashid Kouhi, accused of narcotics-related charges. The previous day, authorities at Lakan Prison in Rasht informed Kouhi’s family members of his execution and asked them to report to the prison “to have a final meeting with him”. Kouhi is scheduled to be executed on Saturday, April 9 and has been denied the right to appeal. Behind China, Iran has for several years in a row had the most number of executions in the world.