In the past two weeks: A large number of mostly Sunni prisoners were executed in Iran; 15 million Telegram user accounts were hacked, leading to arrests of individuals for their beliefs and activities; meanwhile the arrest and subsequent release of Mehdi Khosravi in Italy upon the request of the Iranian judiciary marked another case of threats facing Iranian activists.

On August 11, Amnesty International announced in its latest report on the state of human rights in Iran that pressure has increased on women activists in Iran and that some of their activities are being suppressed with charges of acting against national security or with threats of arrest and imprisonment.

On August 5, the Salar Aghili concert was canceled in the city of Sabzevar. Gholamali Sadeghi, attorney general of Razavi Khorasan province, announced that the decision to cancel the concert was made as a result of complaints from Islamic scholars and amid concerns over “events” during and after the concert. He added that no concerts would take place in the province until the provincial General Culture Council specifies a framework for organizing concerts.

On August 8, First Vice President Eshagh Jahangiri announced that the judiciary would take steps against individuals who insult the president. In Iran, insulting top-level government officials is considered a crime. To date, many people have been prosecuted for insulting the Supreme Leader or the president (during the Ahmadinejad years).

On August 10, the police arrested Valiollah Vaziri, a member of the LGBT community who had been raped by a group, for carrying out a haram act. Vaziri’s family is currently trying to have authorities allow for him to be released on bail. 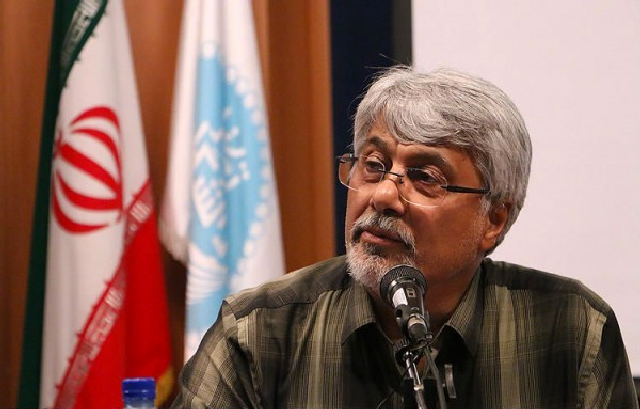 On August 9, it was announced that Isa Saharkhiz’s case will be referred to the criminal court as the first instance of a political crime. Saharkhiz is a reformist journalist serving a three-year sentence on the charges of propaganda against the regime and insulting the Supreme Leader, the head of the judiciary, and the president (Ahmadinejad).

On August 11, labor activist Ebrahim Madadi was sentenced to five years and three months in prison. Madadi is a member of the Syndicate of the Workers of Tehran and Suburbs Bus Company and has been charged with “colluding to commit crimes against national security and disturbing public order through participation in illegal gatherings”.

On August 4, Amnesty International launched a new campaign to free Nazanin Zaghari-Ratcliffe, the British-Iranian dual national employee of the Reuters Foundation who was arrested in Iran. Zaghari-Ratcliffe had visited Iran to see her parents and was arrested upon trying to leave the country. On August 9, British Prime Minister Theresa May spoke over the phone with President Hassan Rouhani, expressing concern over the cases of British citizens imprisoned in Iran, particularly Zaghari-Ratcliffe, and calling on him to try to secure their release.

On August 5, it was announced that Isa Saharkhiz’s health was in critical condition in prison. Saharkhiz, who has been a political prisoner since November 2015, suffers from a heart problem, and physicians have deemed that continued imprisonment is dangerous for him.

On August 7, the businessman and entrepreneur Shahram Jazayeri was arrested on the charges of “colluding to act against national security by disturbing public order and wellbeing”. Jazayeri was released from prison 2 years ago after spending 11 years behind bars for economic fraud.

On August 12, political and human rights activist Mehdi Khosravi, who is executive director of the Iran National Council for Free Elections, was released from police detention after being arrested in Italy on August 6. Khosravi, who has political asylum in the UK, had traveled to Italy for vacation and arrested by Italian police upon the request of the Iranian judiciary. Reza Pahlavi, the former heir to the throne of Iran, wrote a letter to the Italian prime minister calling on him to release Khosravi, since extraditing him to Iran could lead to imprisonment, torture, or even execution.

On August 2, media across the world reported that 15 million Telegram user accounts were hacked. Telegram is one of the most popular messaging services in Iran, with an estimated 20 million users inside the country. By accessing the phone numbers of 15 million people, the hackers were able to draw up the network of Telegram users in Iran. It is assumed that the hackers had the backing of the Islamic Republic’s security forces, which for some time now have pressured Telegram to provide them with user information.

Online security researchers believe that more than 10 Telegram user accounts were compromised in this attack. Hacking the accounts of civic and political activists before arresting them has recently become common practice in Iran. Even though Iranian authorities are constantly growing their capacity for cyber attacks, it seems that civil society and the activist community in Iran are not taking the necessary measures to protect themselves.

The website Konesh Tech has published an infographic outlining 10 steps for protecting oneself online.

On August 9, the police reported the arrests of four administrators of Telegram channels. Three of these individuals are being charged for blasphemy on the channels.

On August 2, Iran’s Organization for Civil Registration announced that the number of murders in Iran will no longer be announced, as this statistic will not solve anything. Shortly after, a movement began on social media under the hashtag of #It’s_been_announced_enough_and_won’t_soothe_any_pain. Through this relatively long hashtag, users are ridiculing the publication of various statements and statistics in Iran, or the lack thereof.

On the occasion of Journalists’ Day in Iran on August 5, the Association of Iranian Journalists published an open letter to Rouhani, calling on him to fulfil his electoral promise to reopen this association.

On August 1, a human rights organization and a news outlet affiliated with Christians in Germany published an open letter to Rouhani, asking him to free three Christian prisoners in Iran. The three individuals are citizens of Azerbaijan and residents of Baku who were arrested at an engagement party in Iran. Azerbaijani officials have not been able to gain access to them.

Following extreme concerns from human rights activists in Iran about the impending executions of a number of Sunni political prisoners and prisoners of conscience, it was reported on August 2 that at least 20 of these prisoners were executed at Rajaei Shahr Prison in Karaj. The mass execution of these prisoners drew reactions from the international community and led to many questions regarding the fairness of the prosecution of the prisoners’ cases and transparency in the Iranian judiciary. The UN labeled it a terrible injustice. Several of the prisoners’ lawyers spoke out about the lack of necessary access to the prisoners’ files during the trials and sentencings, and there were suspicions that a few of those who were executed were arrested, tried, and executed solely for knowing the other accused individuals. One lawyer also announced that the death sentence contradicted Iranian law on moharebeh (“enmity against God” -- the main charge against the prisoners). After news of the executions was announced, a state of emergency was declared in Rajaei Shahr Prison, with anti-riot police attacking the Sunni ward of the prison. The families of the executed prisoners in Kordestan and Sistan and Baluchestan were asked to refrain from organizing funerals. Meanwhile, the anonymous Tehrani graffiti artist Black Hand sprayed anti-execution graffiti on walls around the city.

Barzan Nasrollah Zadeh, one of the individuals executed in Rajaei Shahr, was under the age of 18 when he was arrested. Even though the execution of minors under the age of 18 is illegal in Iran, officials keep juvenile offenders in prison until they reach the legal age and then have them executed. News of the execution of Nasrollah Zadeh unleashed a new wave of criticisms against the judicial system in Iran.

On August 3, three prisoners were executed in the city of Saghez on charges involving narcotics and murder. The same day, a prisoner was executed in Taybad on the charge of drug smuggling.

On August 6, nuclear scientist Shahram Amiri was executed. Amiri, who had returned to Iran after living in the United States for a while, was arrested and had been held in solitary confinement since 2010. Amiri’s case has raised many questions about transparency in the Iranian judicial system.

On August 9, Mohammad Abdollahi and five other prisoners were executed at Urmia Central Prison. Efforts by Abdollahi’s lawyer and human rights activists to save his life were unsuccessful. His lawyer claims that though Abdollahi was charged with moharebeh, he had never touched a weapon. The lawyer criticized the judicial process, saying that it was not carried out fairly and that Abdollahi was executed as an innocent man.

On August 9, a prisoner was executed in the city of Saveh for the charges of armed robbery and rape. 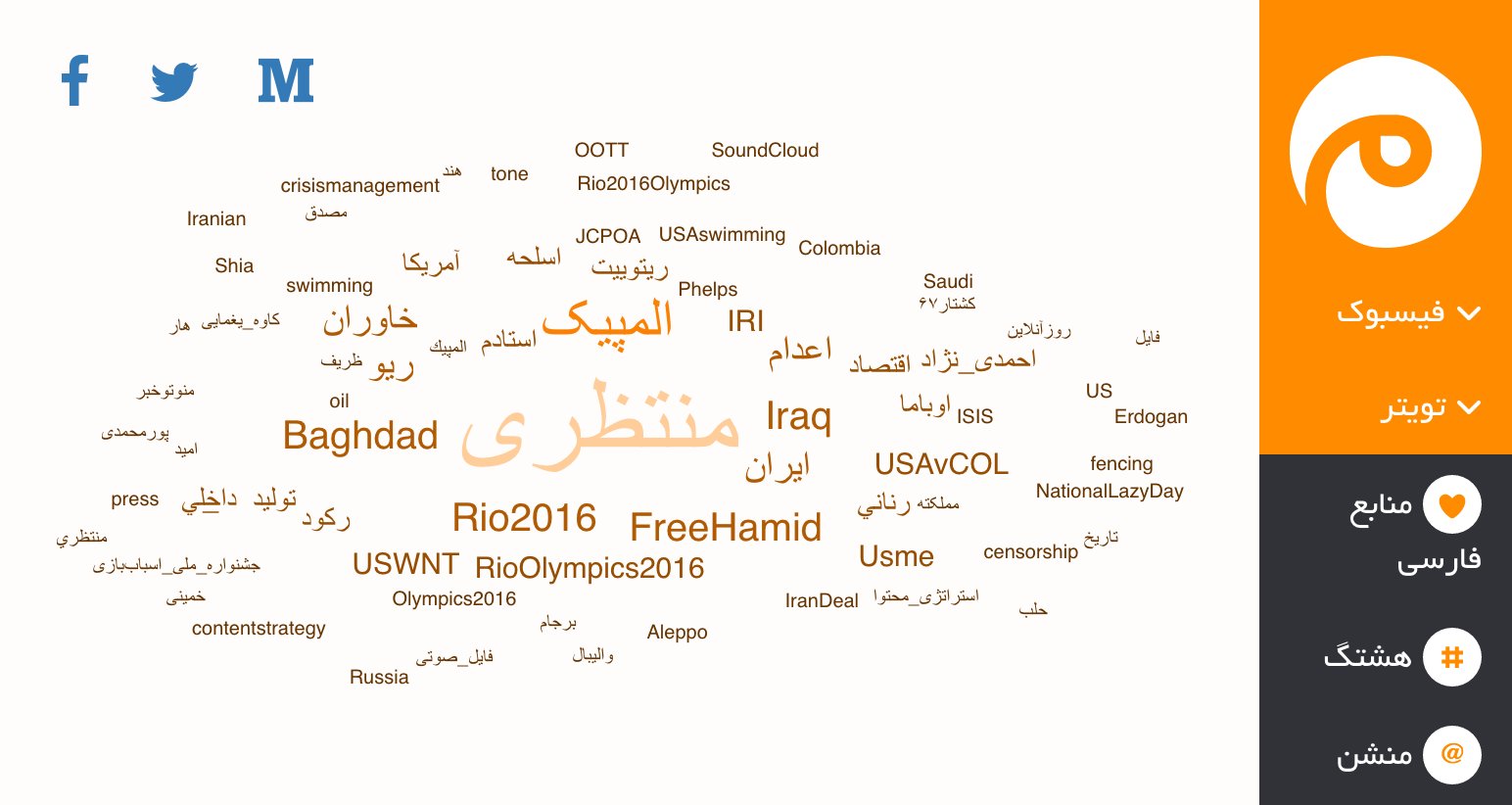 The Montazeri hashtag was more popular than the Olympics. Source: Meidoon

On August 9, the official website of Ayatollah Montazeri, a deceased Islamic scholar and the one-time designated successor to Ayatollah Khomeini, published an audio recording of a meeting in which Montazeri speaks about the executions of regime opponents in Iranian prisons in 1988. Although Montazeri’s opposition to these executions was widely known and was the reason for his removal as Khomeini’s successor, the newly published tape presents a fresh perspective on this story. Iranian social media users and followers of Farsi-language media were so focused on this topic that, for a while, hashtags related to Montazeri exceeded those related to the Rio Olympics. Many of the individuals responsible for the summer 1988 executions are now high-ranking government officials. Sometime after the audio recording was published, Montazeri’s website removed the file in response to pressure from the Intelligence Ministry, although other sites and social media continued to publish it.

On August 10, Zabihollah Khodayan, the legal deputy of the Iranian judiciary, announced that the judiciary had not reached an internal agreement on the matter of eliminating the death sentence for drug smuggling. A group of parliamentarians had put forward a bill that would have replaced the death sentence with life imprisonment in such cases. Iran has the highest number of executions per capita worldwide.