In the past two weeks: President Hassan Rouhani reacted to the cancellation of concerts in Khorasan; 11 Christian converts were arrested in Isfahan; dozens of people were arrested for attending a party; a man who attacked women for improper veiling was hanged in public.

On August 22, President Hassan Rouhani reacted to the issue of canceled concerts in the province of Khorasan. Recently after the cancellation of many concerts, Ahmad Alamolhoda, who represents the Supreme Leader in Khorasan, had said that concerts were not permitted in the city of Mashhad. In response to Alamolhoda’s statements, Rouhani said that Iran has a parliament and not just anyone can legislate. He also called on the minister of culture, who had ceded to Alamolhoda’s will and canceled the concerts, to act according to the law. 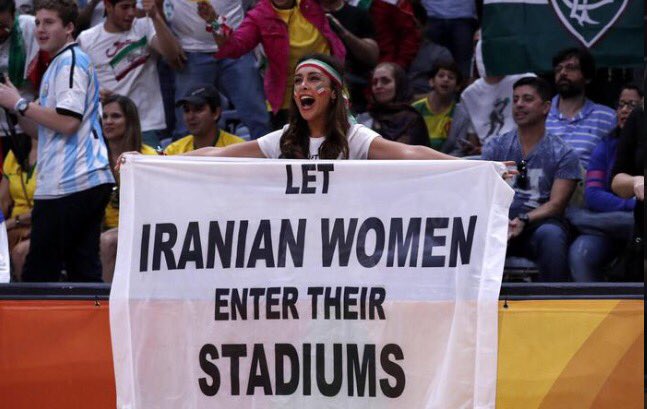 On August 14, at the Iran-Egypt volleyball match, women’s rights activist Darya Safaei protested the ban on women’s entry into stadiums in Iran. She displayed a large banner with the words (in English): “Let Iranian women enter their stadiums.” Security guards initially attempted to remove her from the arena but eventually relented. On August 25, Vice President for Women’s and Family Affairs Shahindokht Molaverdi stated during a television program that after 36 years, the Islamic Republic must address the issue of women’s attendance at stadiums.

On August 21, Kurdish student activist Afsaneh Bayazidi was sentenced in Mahabad to four years in prison and exile to Kerman. She was charged with propaganda against the regime, insulting the Supreme Leader, and collaborating with a Kurdish party.

On August 17, the Majles announced in response to an inquiry from the Guardian Council that the Council cannot disqualify a candidate who has already been fairly elected. Following the parliamentary elections earlier this year, the Guardian Council disqualified Minoo Khaleghi, a candidate who had been election from Isfahan. The inquiry also seeks to establish whether the nullification of results in the electoral law applies to electoral districts as a whole, or to each candidate. The Majles has referred this second question to its Councils and Internal Affairs Committee for further study.

On August 12, 11 Christian converts were arrested in Isfahan and taken to an undisclosed location. These individuals belong to a house church.

On August 16, Tehran Prosecutor Abbas Jafari Dolatabadi reported that a dual national has been arrested on charges of espionage. The identity of the individual is still unknown. Recently the U.S. State Department warned citizens of Western countries who also hold Iranian citizenship to avoid traveling to Iran.

Jafari Dolatabadi also attributed the denial of former President Mohammad Khatami from going to the theater to the prosecutor of the Special Clerical Court. It had been reported earlier that the Tehran prosecutor’s office had stopped Khatami from attending the play “The Nightly Reports of Dr. Mossadegh”. Some observers interpret the restrictions placed on Khatami as a kind of house arrest.

On August 18, the IRGC arrested an individual in the province of Golestan on the charge of “anti-religious activities in the virtual space.” The IRGC’s public relations referred to the person as a 33-year-old woman, but neither her identity nor her status is known. It seems that the woman who was arrested was active on Telegram channels. On August 23, the information service of the cybersecurity command of the IRGC reported the summoning or arrest of the administrators of over 450 pages, channels, and groups on social networks and messaging tools, including Telegram, Facebook, and Twitter.

On August 23, at least 16 Arab activists were arrested by intelligence agents in the city of Dezful. The reason for their arrest is still unknown.

On August 24, police in the city of Gorgan arrested 40 young women and men for attending a party. In the days prior to that, many others were arrested for attending various parties, including 20 people in Amol, 63 people in Shiraz, and 60 people at a restaurant in Sorkheh Hesar National Park, near Tehran.

On August 15, Iran Human Rights published a report in which it named seven juveniles currently on death row in the western part of Iran. The execution of minors is illegal in Iran, but judges keep convicted minors behind bars until they reach the age of 18 and then have them executed.

On August 13, Justice Minister Mostafa Pourmohammadi said that prisons in Iran are dealing with health issues as a result of the high number of prisoners. Human rights organizations have steadily warned about the unsanitary conditions of Iranian prisoners and the inability of prisoners to access medical care. On August 23, in referring to the suspension of the right to insurance for prisoners upon entering prison, the health minister expressed readiness to help the judiciary improve the sanitary conditions of the country’s prisons.

On August 13, following the statements of prominent Principlist Mohammad Reza Bahonar about the continuation of the house arrest of the Green Movement leaders, the debate over the release of these political leaders started up again. The next day Elham Aminzadeh, the president’s special assistant for citizens’ rights issues, said that the Supreme National Security Council had voted for the house arrests of Mir Hossein Mousavi, Zahra Rahnavard, and Mehdi Karroubi in order to maintain public order, but now that order has been maintained, the house arrests of these individuals should come to an end.

On August 14, Richard Ratcliffe started an international media campaign to bring pressure on Iranian authorities to release his wife Nazanin Zaghari-Ratcliffe and their child. Zaghari-Ratcliffe is an employee of the Thomson Reuters Foundation who visited Iran to see her family and was arrested along with her young daughter upon trying to leave the country.

On August 15, Mostafa Tajzadeh, the former political deputy of the interior minister and a reformist political activist, published an open letter asking for forgiveness from the families of the political prisoners who were executed in 1988 and calling on Islamic Republic officials to do the same and to reform judicial dealings in the country in order to help heal the national wounds stemming from those executions. The same day Sadegh Larijani, head of Iran’s judiciary, responded to the publication of an audio recording of Ayatollah Montazeri by defending the judiciary and the executions of 1988.

On the same day, the families of a number of Kurdish prisoners who were executed on August 2 claimed that the prisoners had been severely tortured before their executions.

On August 16, a prisoner was executed in Tabas on narcotics-related charges.

On August 18, 22 human rights groups published a statement condemning the recent spate of executions in Iran and expressed concern over the disproportionate application of the death penalty toward ethnic minorities. These groups labeled the executions “quick and arbitrary” and called the way in which the cases were prosecuted unfair.

On August 22, a man known as “Saeed B.”, who attacked nine women with a knife in the city of Jahrom in 2014, was executed in public. The stabbings took place at a time when some extremist clerics were encouraging people to deal with women who did not properly obey the hijab. Many believe that Saeed B. carried out the attacks in response to these appeals.