On November 30, Mehdi Karroubi, one of the leaders of the Green Movement, asked Ali Motahari to pursue his case in a public court. Motahari had recently expressed disagreement with the Supreme Leader over the treatment of Karroubi and Mir Hossein Mousavi, labeling their ongoing house arrest since 2011 as unjust.

On Student Day (December 7), Rouhani’s speech to students at the University of Tehran was interrupted by chants from the audience calling for the end of the house arrest of Green Movement leaders Karroubi, Mousavi, and the latter’s wife Zahra Rahnavard. Unlike at last year’s speech, the Basij students’ group was much smaller due to a boycott of the speech in protest of the cancellation of a number of speeches by conservatives across the country that day.

Three members of the newly established reformist Neda Party were arrested on December 9 and their personal effects were confiscated. The party was only given its official permit to operate on December 1.

News sources reported that 29 inmates in Urmia Prison went on a hunger strike beginning November 20, in protest of the decision to integrate political prisoners with non-political ones. The hunger strikers see the integration as a move by authorities to increase pressure on them.

On December 6, imprisoned Washington Post correspondent Jason Rezaian was charged by a Tehran court, but the exact charges have not been announced publicly. Rezaian has been in detention since July, without access to a lawyer and despite strong condemnation from outside Iran and criticism from some Iranian officials. In an interview with CNN, Rezaian’s mother asked Khamenei himself to intervene in the matter and work towards her son’s release.

Mohammad Javad Larijani, head of the Iranian judiciary’s human rights council, announced on December 5 that the judiciary will try to reduce the number of people executed on narcotics-related charges. If the proposed changes to Iranian law are approved by the Majles, according to Larijani, 80 percent of executions could be eliminated. 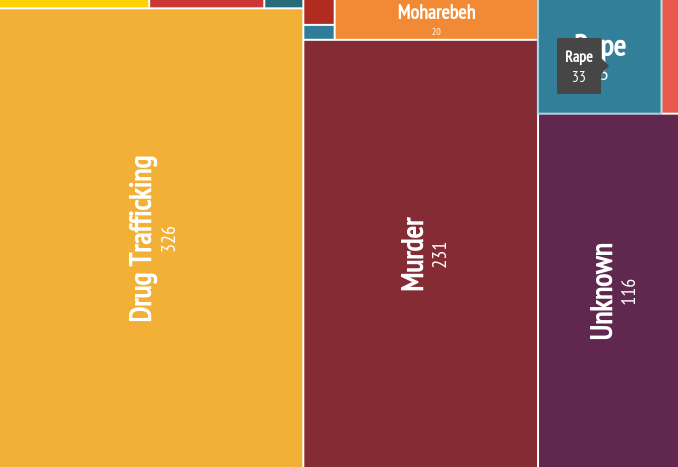 On December 4, a branch of the Iranian Supreme Court accepted the task of reviewing once again the case of Soheil Arabi. However, three days earlier, a spokesman for the judiciary announced that amnesty for Arabi is currently out of the question. Arabi was recently condemned to death on the accusation of publishing satirical content insulting the prophet of Islam and officials of the Islamic Republic on social media.

In its latest report on “Freedom on the Net”, Freedom House once again found Iran’s status to be “Not Free”, although its scoring indicates a very slight loosening in limits on content from the previous year.

Prominent human rights activist and lawyer Nasrin Sotoudeh was arrested and detained briefly along with her husband on their way to the Iranian Bar Association, where she has led daily protests over the suspension of her license to practice law. The arrest took place on December 10, which was also Human Rights Day.

Political and animal rights activist Ali Tabarzadi was arrested at his home on December 5. Sources report that Tabarzadi may have been arrested over his plans to organize a protest against a proposed bill that would ban the keeping of some pets in Iranian homes.

The Friday Imam of the city of Rafsanjan denounced Baha’is as an “impure sect” and called for their expulsion from the city.

Recently, a delegation from the government of Afghanistan visited Tehran to discuss the issue of Iran’s Afghan refugees, hundreds of thousands of whom are faced with potential deportation. On December 12, the Ministry of Foreign Affairs of Iran announced that the right to stay in Iran has been extended for six months for 450,000 Afghan refugees.

Lately the controversial topic of cohabiting unmarried couples in Iran has reemerged in public discourse. The office of the Supreme Leader released a statement calling for a crackdown on these “white marriages,” labeling them as “shameful.”