On February 3, news editor and journalist Bahman Daroshafaei was arrested in Tehran. It is still unknown why he was arrested or where he is being held. Daroshafaei’s mother Safoura Tofangchiha wrote an open letter to Hassan Rouhani, asking him to push for her son’s release. She wrote: “You know that we did not vote for you just to remove the sanctions, though that was important and thank God it happened. We voted for you so that hope would live on, so that oppression would wane, so that people could have dignity, so that the youth would not leave, so that they would stay and build Iran.”

On February 2, Justice for Iran published a set of 13 security tips that everyone should follow. In recent months, cyber attacks against Iranian activists have expanded in terms of both volume and sophistication. Several activist organizations and groups, including Article 19, recently published a game called Iropoly, which seeks to better familiarize Iranian users with Internet security.

On February 1, defense lawyer Mahmoud Alizadeh Tabatabaei announced that the Revolutionary Court has officially charged his clients, imprisoned journalists Isa Saharkhiz and Ehsan Mazandarani, with propaganda against the regime, acting against national security through assembly and collusion, and insulting authorities. The Islamic Republic typically uses vague charges such as these to punish and imprison its political opponents. Up to this point, Saharkhiz and Mazandarani were being held in temporary detention. The date for their trial has not been revealed yet. 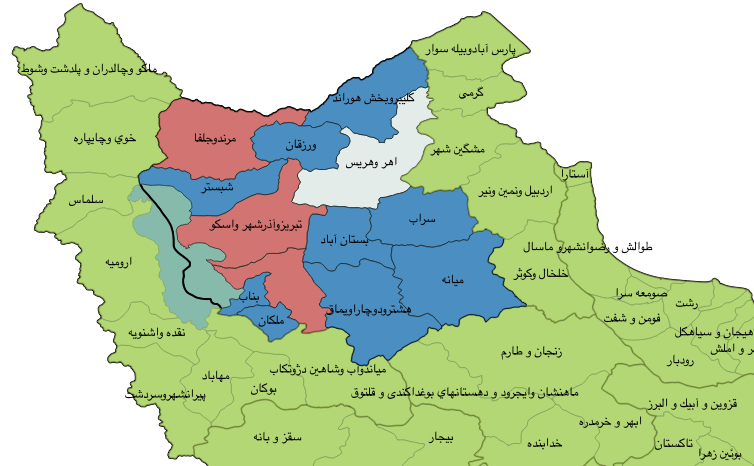 From the new Nabz-Nameh: electoral districts in East Azarbaijan

On February 8, the election special issue of the Nabz-Nameh was published. This Nabz-Nameh examines how equality of voting power can be assured, which is one aspect of organizing fair elections. Majles representatives throughout the country must be elected in such a way that each one represents a fair number of citizens. Every Iranian citizen would thus have an equal say in the Majles. The most important criterion for bringing about such fairness is equality across the electoral districts in the proportion of population per district relative to the number of its parliamentary seats. In exceptional cases though, such as times when minority voices might not be heard, the spirit of justice calls for other criteria to be considered as well. This edition of the Nabz-Nameh explores and analyzes the history of electoral districting in Iran, the current situation, and future possibilities for bringing about equality in the voting power of citizens across the country.

On February 5, the UN Committee on the Rights of the Child advised Iran to improve the rights of girls under the legal age (18 years). Among its recommendations are reforms to the laws on hijab and marriage, as well as the penal code.

On February 11, the same day as the anniversary of the victory of the Islamic Revolution, Amnesty International announced in a statement that despite nearly 40 years on from the Revolution, the judicial system in Iran “remains largely inadequate, inefficient and inconsistent with international fair trial standards.”