This month in human rights in Iran

Environmental problems and concerns over their consequences for the public are a constant in Iranian discourse, but this topic has been the subject of intense discussion in recent months. Dust storms in the southwest of Iran have devastated residents of cities such as Ahvaz, and many blame a legacy of poor environmental planning and a lack of government attention to the problem for the ongoing crisis. In Ahvaz, a group of citizens protested in front of the provincial headquarters of Khuzestan. On February 16, the Iranian government announced that it has a plan to deal with the dust storms, though full details are not yet revealed. The next day, a coalition of Iranian human rights groups published an open letter to UN Special Rapporteurs, including Ahmed Shaheed, informing them that the right to live for the people of Iran’s southwest is in danger.

January 30 marked the 100th day of human rights activist and lawyer Nasrin Sotoudeh’s daily sit-ins in front of the Tehran Bar Association, demanding the reinstatement of her right to practice. Three days later, Sotoudeh was defiant in the face of security guards’ efforts to disperse the crowd of supporters that had joined her in support.

On January 25, prominent human rights activist Narges Mohammadi was detained by security forces and therefore unable to meet with Claudia Roth, vice president of the German Parliament. Due to her meeting with EU foreign policy head Catherine Ashton in Tehran in March, Mohammadi has been subject to interrogations since then and charged with “propaganda against the regime”.

Ahmad Reza Haeri, a political activist who has represented the families of those prisoners injured in the attack on Ward 350 of Evin Prison in April, was sentenced to three and a half years in prison.

Women’s rights activist Mahdieh Golroo was released on bail after 93 days in prison (including 45 in solitary confinement). Golroo was arrested after protesting in front of the Majles over the acid attacks against women in Isfahan and authorities’ failure to act decisively in identifying the perpetrators.

On February 17, Sadegh Larijani, head of Iran’s judiciary, defended the house arrest of the Green Movement leaders since 2011 as completely legal. The Center for the Defenders of Human Rights, among other prominent voices, has criticized the ongoing house arrest as unconstitutional.

On February 16, the Iranian judiciary also announced that there is a general media ban on former reformist President Mohammad Khatami. Rumors of this ban on Khatami had emerged in recent months, but this is the first official confirmation of such a measure. The following day, Iranian social media users began publishing images of and quotes by Khatami, using the hashtag #رسانه_خاتمی_میشویم‏ (“we’ll be Khatami’s media”).

Conservative member of parliament Ali Motahari said on January 29 that freedom of expression has decreased under Rouhani’s presidency. Motahari, who has drawn controversy recently over his outspoken statements against the ongoing house arrest of the Green Movement leaders, cited rising self-censorship in the media and noted that Rouhani’s administration has faced greater than normal pressures. Not for the first time, Motahari’s website was filtered.

In its 2015 World Press Freedom Index, Reporters Without Borders has ranked Iran at 173 out of 180 countries, the same as last year’s ranking.

A group of Iranian civic activists has called on judicial and security officials to release journalist and former students’ rights activist Saeed Razavi Faghih. The 96 signatories of the letter called for medical furlough to be granted to Razavi Faghih, citing his serious health problems.

According to the Iranian judiciary, imprisoned Washington Post correspondent Jason Rezaian will be tried “soon.” Rezaian has been detained since July without access to a lawyer, and charges against him have not been announced publicly. Soon after this news, it was announced that Abolghassem Salavati will be the judge to preside over Rezaian’s trial; Salavati has earned the label of “the hanging judge” for his tendency to mete out severe punishments, including executions, to dissidents.

The rights of ethnic and religious minorities in Iran are violated in a variety of ways. On the occasion of the 36th anniversary of the Islamic Revolution, Nabz-Iran asked followers on social media for their thoughts on the right to be educated in one’s mother tongue, a question that resulted in a heated discussion. We likewise invite you to join this discussion and share your opinion on this Facebook post.

Mohammad Jafar Montazeri, the head of Iran’s Court of Administrative Justice, announced in a new verdict that Baha’i students do not have the right to an education in Iran. Baha’i students have undergone severe persecution in the Iranian educational system, but lately Iranian officials have openly confirmed that Baha’is lack the same rights as other Iranian citizens.

According to HRANA, in recent months, Muslim residents of Rasht have been subject to interrogations and pressure from the Ministry of Intelligence over their relations with Baha’is. At least 20 individuals have been taken in for such interrogations since November 17.

On February 5, 16 members of the “Erfan-e Halgheh” (or “interuniversalist”) mystical movement were found guilty of blasphemy and sentenced to a total of 37 years in prison. They were also ordered to pay a heavy fine of 130 million tomans.

In recent weeks, workers have been protesting and striking throughout Iran, mostly over unpaid wages and concerns over pay increases lagging behind the high rate of inflation. For example, teachers in a number of Iranian cities have been protesting over the new budget for the Ministry of Education, which sets wages for teachers at below the official poverty line.

On February 1, over 1000 workers at the Safa piping and milling factory in Saveh went on strike and staged a sit-in over unpaid wages. The workers were later removed and the factory was shut down.

Trials began for nine miners from the Bafgh iron ore mine, arrested for their actions in the springtime strikes that involved over 5000 workers. The government has still not followed through on its promise to stop the privatization of part of the mine, the issue that led to the strike in the first place.

The International Federation for Human Rights (FIDH) published a statement on the “ongoing judicial harassment of imprisoned unionists”, as well as continued pressure on and persecution of union and labor activists. FIDH calls for international action to urge Iranian authorities to end the crackdown on these activists and release unjustly imprisoned unionists. 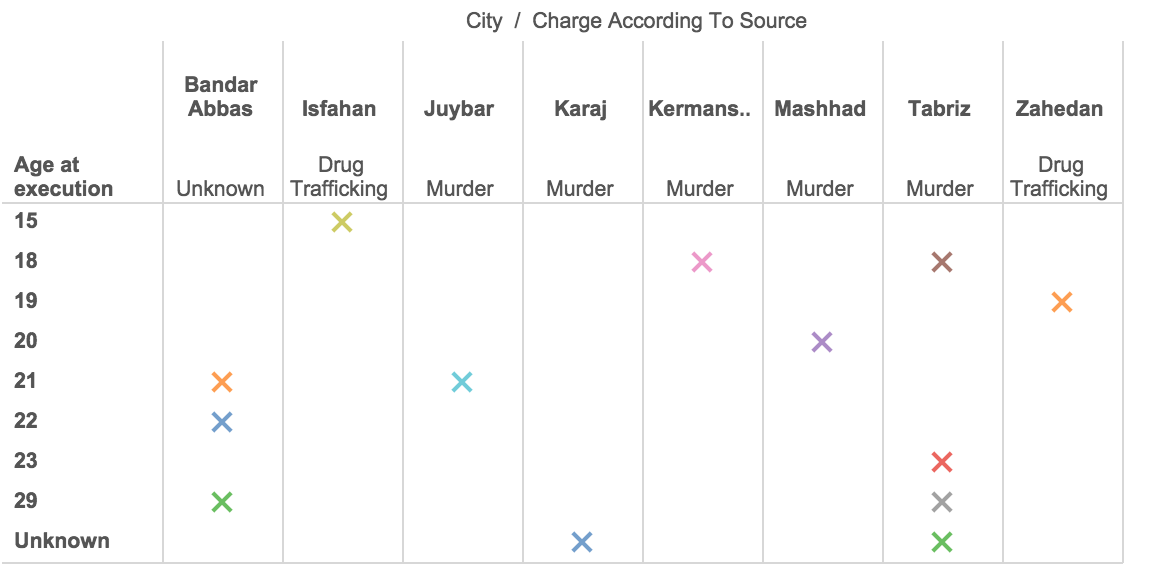 Infographic: Executions of juveniles in Iran - 2014

On February 7, Iran’s Labor Minister Ali Rabiei criticized the inequality between men and women in Iranian workplaces. Rabiei referred to the lack of protection of women’s labor rights as well as a persistent wage gap across the genders.

On February 10, around 140 students and alumni of Tehran’s Amirkabir University released a statement calling for the release of fellow students Zahra Khandan and Saha Mortezaei. The two were arrested last month as part of a wave of arrests of women’s rights activists, believed to be in connection to planned protests regarding the acid attacks against women in Isfahan.

On January 31 and February 1, the IRGC’s cyber unit announced that, as part of a surveillance program called “Operation Spider”, a total of 12 Facebook users were arrested over “immoral” content and 24 others were summoned for questioning.

On February 5, Iran’s minister of communications announced that “smart filtering” of social media will be implemented instead of general filtering. Smart filtering would work automatically and filter content deemed inappropriate, rather than the sites themselves.

On February 7, hundreds of students participated in a sit-in in a dormitory at Tehran University, their figures ultimately growing from around 50 to as many as 800. The students demanded a response from university officials regarding students’ complaints about issues such as increased tuition, poor Internet service, and “mistreatment [of students] by university security personnel”.

As part of its World Report 2015, Human Rights Watch reviewed the state of human rights in Iran, finding “no significant improvements in human rights in the first full year in office of President Hassan Rouhani”.

Saman Naseem’s execution was scheduled for the morning of February 19, but as of latest reports, the execution did not take place, and it is still unclear what Naseem’s fate will be. Naseem, who is now 22 years old, was sentenced to death on the charge of “moharebeh” for his membership in an outlawed Kurdish militant group when he was 17. According to Iranian and international law, the death penalty is forbidden for those under the age of 18, but some judges are known to keep convicted minors in prison until they reach the legal age, before having them executed. Naseem’s case has drawn extensive international attention and pressure on the Iranian judiciary, including from the United Nations, Amnesty International, and Human Rights Watch. People inside Iran also joined the movement to halt Naseem’s execution; for example, a group of activists sent an open letter to the minister of information to this effect.

Seidad Arjmandi, convicted of drug trafficking, was set to be executed in Ahvaz’s Karoon Prison on February 9, and his family was informed to say their last goodbyes. However, Arjmandi’s death sentence was commuted to a life sentence at the last minute.

The Campaign in Defense of Civil and Political Prisoners reported that on February 16 five prisoners were hanged at Urmia Central Prison.