In general, Iranian human rights groups are reporting that there has been a new wave of arrests of activists in Iran in recent months.

A Revolutionary Court judge has threatened to transfer imprisoned civil and children’s rights activist Atena Daemi to Gharchak Prison unless she admits having contact with Ahmad Shaheed, the United Nations Special Rapporteur on Human Rights in Iran. Daemi, whose charges include the accusation of spreading propaganda against the regime, has been held in both solitary confinement and amid unsanitary conditions.

Leila Arshad and Sarvar Monshizadeh stepped down as directors of the “House of Sun”, the first shelter in Iran for homeless women and women struggling with drug addiction. They cited the inability to secure a budget and a lack of cooperation from authorities as the reason for their resignation. Despite the government’s emphasis on strengthening the role of NGOs, in practice, the directors of these organizations are grappling with a lack of coordination as well as structural difficulties that are making their work unfeasible.

On January 19, Amnesty International called for the immediate release of Mahdieh Golroo, a women’s rights activist who has been in prison without formal charges for more than two months. Golroo was arrested for protesting the acid attacks against women in Isfahan, and she has been denied access to a lawyer.

On the same day, a number of other women’s rights activists were arrested at their homes in Tehran, including Zahra Khandan and Saha Mortezaei. Although full details are still unavailable, it appears that these arrests are also connected with the protests over the acid attacks (the perpetrators of which have still not been arrested).

Journalists’ rights and freedom of expression

Iranian journalists Jila Bani-Yaghoub and her husband Bahman Ahmadi-Amouee were among the recipients of the 2015 Oxfam Novib/PEN Awards for Freedom of Expression. Both have suffered extensive persecution and arrest for their journalistic activities in Iran.

On January 14, it was announced that imprisoned Washington Post correspondent Jason Rezaian was finally charged and will be tried in a Revolutionary Court. The specific charge, however, was not revealed, nor was a timeline given for legal proceedings.

The newspaper Mardom-e Emrooz had its license revoked after publishing a headline that quoted George Clooney’s “I am Charlie” statement, in reference to solidarity with the French satirical publication Charlie Hebdo following the terrorist attacks on its offices on January 7. On January 19, Reporters Without Borders released a statement condemning the closure of the newspaper and criticizing conservative media outlets (such as Kayhan) that had called for its publishers to be arrested.

Journalist and prisoner of conscience Sajedeh Arabsorkhi was sent back to prison from the hospital. Arabsorkhi suffers from a digestive disorder and was returned to prison against the wishes of her physician.

Filmmaker Tahmineh Milani was summoned to court on January 12 over the publication of the screenplay for her movie “Scheherazade,” even though its publication had been authorized by the Ministry of Culture and Islamic Guidance.

In recent weeks, the Rouhani administration has been vocal about teaching local languages and literature in Iranian schools. For years, this issue has been among the most controversial topics in discrimination in Iran. Currently, students in various regions of Iran are unable to learn their native tongues (Azerbaijani, Kurdish, Baluchi, etc.) alongside Persian language and literature in schools, and generally efforts in this direction are viewed with suspicion as separatist steps. However, human rights experts consider learning one’s native language or dialect as a basic right.

Meanwhile Iranian civil society, especially the active online community, has grown more sensitive to discrimination against Afghan students in Iran and is working to end it. Recent cases, including the punishment of Afghan students, threats to expel them from school, and denial of their university registration for the next academic year, have elicited a great number of reactions from civil society, to the extent that the Ministry of Education formally announced that all students in the country have the right to education and must be accepted in schools.

The Ministry of Education has also released a statement confirming its position that corporal punishment is banned in schools. The announcement came in response to media reports that suggested such practices would be legal. 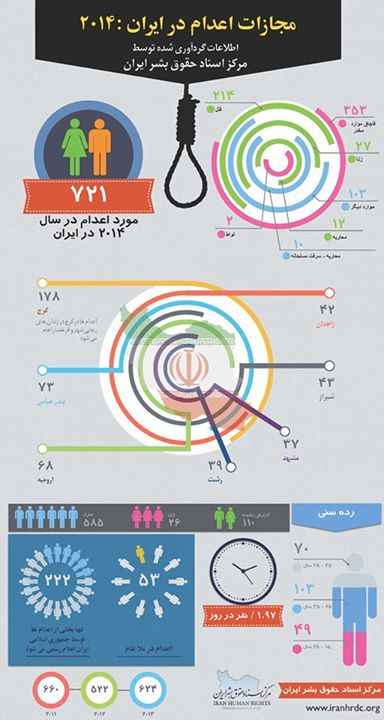 Kurdish political prisoner Vali Doroodi was granted 8 days’ furlough after spending the last 18 years in prison. Doroodi, who was denied leave multiple times in the past, is serving a life sentence after being convicted of having ties with a banned Kurdish political party.

On January 12, 21 prisoners from Evin and Rajaei Shahr Prisons jointly published an open letter expressing concern over the health of Ayatollah Hossein Kazemeini Boroujerdi, a cleric imprisoned for his controversial views on the separation of church and state.

On January 21, an official from the judiciary reported that to date, doctors have refused to carry out the punishment of qisas (“retribution”) against a man convicted of an acid attack 9 years ago. The punishment would involve surgically removing the convicted man’s eye and ear, corresponding to the victim’s loss of an eye and ear.

The Iran Human Rights Documentation Center has published a new infographic on executions in 2014, cataloging the types of punishments, the geographic distribution of executions, and the demographics of those executed.