In the past two weeks: Narges Mohammadi started a hunger strike; Jafar Azimzadeh was released after a two-month hunger strike; Zohreh Tonekaboni is barred from leaving the country; the Iranian Society for the Prevention of Cruelty to Animals protested the Shahin Shahr prosecutor’s plan to round up pets.

On June 22, political activist Seyed Ahmad Nabavi published a note addressed to President Hassan Rouhani, implying that his administration was responsible for the sentence of 444 lashes meted out to Mohammad Reza Fathi, a blogger from Saveh. The sentence was handed down by a court in Saveh on June 10. In his note to Rouhani, Ahmad Nabavi writes that Fathi was sentenced because the complaints filed against him by the previous administration were not withdrawn. He calls on the Rouhani administration to order its officials to withdraw such charges.

On June 25, the Iranian Society for the Prevention of Cruelty to Animals sent a letter to the prosecutor of Shahin Shahr in Isfahan Province protesting the rounding up of pet dogs in the city. Recently, officials from the prosecutor’s office in Shahin Shahr went into homes, seized some dogs, and released them in the desert. On multiple occasions in recent years, Iranian officials have taken steps against keeping pets in various cities across the country.

On June 27, political prisoner Narges Mohammadi started a hunger strike in Evin Prison. Over the last year, Mohammadi has had just 10 minutes of communication with her children. Prison authorities in Iran deny prisoners the ability to contact people outside the prison as a means of placing pressure on them. 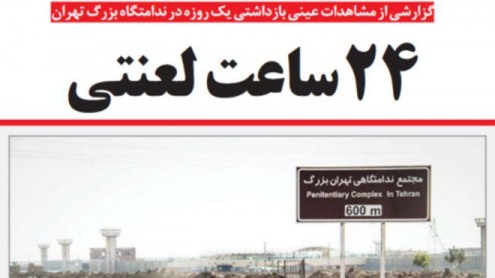 On June 20, the website of the suspended newspaper Ghanoon announced that the newspaper was suspended by the Tehran prosecutor’s office as a result of complaints from the intelligence branch of the IRGC. The reason for the suspension of Ghanoon has not been formally announced yet, but Tehran Prosecutor Abbas Jafari Dolatabadi had earlier said that one of the newspaper’s articles, titled “Damned 24 Hours”, was a lie. The article dealt with conditions at a prison in the environs of Tehran.

On June 27, Abolhassan Firoozabadi, head of Iran’s Supreme Council of Virtual Space, announced that anyone carrying out media activity on social networks must acquire a permit. The Iranian government has been trying for some time now, through various means, to control the activities of its citizens on social networks.

On June 17, the family members of workers arrested in Ahvaz called for their release. A number of workers contracted by the Ahvaz municipality had earlier gathered in front of the municipality’s offices after not receiving wages for four months. The police arrested 20 of them, which was met with protest by the Supreme Assembly of Islamic Labor Councils.

On June 30, labor activist Jafar Azimzadeh was released after a two-month hunger strike and widespread attention from inside and outside Iran to his condition while in prison. Even though the Tehran prosecutor announced last week that he would not do anything even if Azimzadeh were to die, supporters of Azimzadeh gathered outside the president’s office. On June 17, Azimzadeh wrote an open letter to Rouhani in which he criticized the government’s treatment of union activities by Iranian workers as a political and security issue.

On June 17, officials at Imam Khomeini Airport stopped political activist Zohreh Tonekaboni from boarding her flight. Tonekaboni, who was intending to travel to Berlin, had already cleared all the legal stages for exiting the country. The reason for her denial of the right to leave Iran is still unclear, but the branch of the Revolutionary Court situated at the airport asked her to refer to Evin Prison for an answer.