Reyhaneh Jabbari was executed on October 25, drawing worldwide condemnation. Jabbari, who was in prison since 2007 and whose execution was postponed on October 1, was sentenced to death for killing a man she claimed tried to rape her. Domestic and international rights group have argued that the killing was in self-defense and that the investigation into Jabbari’s case was flawed. A voice message recorded by Jabbari for her mother in April was released after the execution and has been circulating on the Internet.

Over the last month, at least eight women in Isfahan were attacked with acid. Although the attackers have not been identified, their presumed motive is to punish women for not observing the hijab strictly enough. These attacks, which have drawn international attention to Iran, were condemned by both liberal and conservative politicians and have led to demonstrations in Isfahan and Tehran. In addition to expressing solidarity with the victims of the attacks, many Iranian activists have criticized authorities’ slowness to arrest the guilty parties.

On October 22, President Hassan Rouhani condemned a proposed bill in Majlis that grants greater authority and protection to vigilantes who seek to enforce Islamic principles. The bill, which is supported by conservative parliamentarians, was introduced several weeks ago but has taken on greater controversy in light of the acid attacks.

On November 2, Ghoncheh Ghavami was sentenced to one year in prison on the charge of spreading anti-regime propaganda. Ghavami, who is British-Iranian, was arrested on June 20 for attempting to attend a men’s volleyball match in Tehran along with a group of other women. Her case has raised international attention, including from the British government and Amnesty International.

Four journalists and a photographer affiliated with the Iranian Students’ News Agency (ISNA) were arrested on October 27 following their coverage of the Isfahan acid attacks, though two were soon released. Reporters Without Borders notes that hardliners have criticized and threatened the media over its coverage of the attacks, accusing it of exaggeration and distortion.

In an October 29 interview with CNN, Mohammad Javad Larijani, head of Iran’s human rights council, defended the Iranian judiciary’s recent actions, including the execution of Jabbari and the arrest of journalists such as the Washington Post’s Tehran correspondent Jason Rezaian, who has now been held without formal charges for over 100 days. 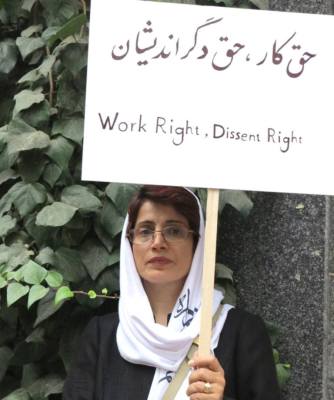 On October 25, prominent lawyer and human rights activist Nasrin Sotoudeh was temporarily detained in Tehran after participating in the demonstration against the acid attacks. Although a ruling that forbade Sotoudeh from practicing law for ten years was overturned in September, she was once again barred from doing so on October 18, this time for three years. In response, she began a sit-in in front of the Iranian Bar Association on October 21 in protest of this ruling. On October 28, Human Rights Watch called on Iranian authorities to “stop detaining and harassing” Sotoudeh.

Civil rights and children’s rights activist Atena Daemi was arrested at her home on October 21 by the IRGC. According to HRANA, Daemi is being held at Tehran’s Evin Prison but to date, there is no further information about the reason for her detainment.

Ahmed Shaheed, the United Nation Special Rapporteur on the Situation of Human Rights in Iran, officially presented his latest report to the UN General Assembly on October 28. Shaheed had earlier told reporters that the high number of executions in Iran since Rouhani’s election is “deeply disturbing.” Forouzandeh Vadiati, a member of Iran’s Permanent Mission to the UN, dismissed Shaheed’s comments as “Iranophobia and Islamophobia.”

What happens when official data is incomplete?
The Political Economy of Fiscal Decentralization under the Islamic Republic of Iran
Infographic: Comparing the death during Persian year of 1398 and previous years in Iran
Political map of Iran's parliament before and after 2020 parliamentary elections - Provinces - Pie chart
Publicly Announced Turnout Rates by Constituency for Iran’s 2020 Parliamentary Elections
END_OF_DOCUMENT_TOKEN_TO_BE_REPLACED