With the onset of the cold season in Iran, a group of civic activists in Ilam have started an initiative to collect warm clothing for those in need. These individuals have placed clothes hangers on the streets, asking citizens to donate their second-hand clothes to the needy.

On September 24, security forces attacked a private party in Shiraz and arrested 23 of the guests. Most of the guests at this party were transgender people and were subjected to verbal and physical abuse by authorities during the arrest.

After Niloufar Ardalan, captain of Iran’s women’s national futsal team, was denied permission by her husband to leave the country in order to compete in the Asian championship, the issue of women’s need to secure their husbands’ permission to travel abroad is once again a hot topic. On October 2, Ayatollah Jafar Sobhani, a Shiite marja based in Qom, reacted strongly to the efforts of Vice President for Women’s and Family Affairs Shahindokht Molaverdi. Earlier, Molaverdi had said that her office is making serious efforts to reform the current law for acquiring passports so that women will no longer need their husbands’ permission to leave the country.

In recent days, after the Supreme Leader issued a new warning regarding foreign influence, a group of parliamentarians warned of the activities of a band of saboteurs in Iranian media. These parliamentarians, who are generally conservative, linked this band to Western countries and Iranians living there, without naming any particular media. Ali Motahari, another conservative parliamentarian, later dismissed these concerns as unfounded.

On September 23, a group of well-known human rights activists in Iran published an open letter to their counterparts throughout the world, calling on them to help put a stop to the death sentence of Mohammad Ali Taheri, founder of the Erfan-e Halghe doctrine. Taheri was arrested for promoting his beliefs and sentenced to death as a result.

On September 17, the director-general of the Organization for Civil Registration of Ghazvin Province announced that in the last Iranian calendar year, more than 920 marriages of girls between the ages of 10 and 14 were recorded in this province. According to him, one marriage of a girl below the age of 10 was also recorded in this period. The marriage of girls under 13 and boys under 15 is illegal in Iran, but such marriages are possible with parental permission and court approval. The decision of the court in such cases generally hinges on the local customs of the area in question.

The situation of journalist and civic activist Shokoufeh Azar, who was arrested over four months ago, remains in limbo. No court has been organized for her, and the judiciary has refused bail. She has also been denied access to a lawyer.

On September 16, the wife of Shapoor Reshnow suffered a miscarriage brought about by fear and nervous stress after a large group of security forces stormed their home in Andimeshk. Security forces raided Reshnow and other civic activists’ homes in the cities of Andimeshk and Haft Tepe, arresting at least 10 people. 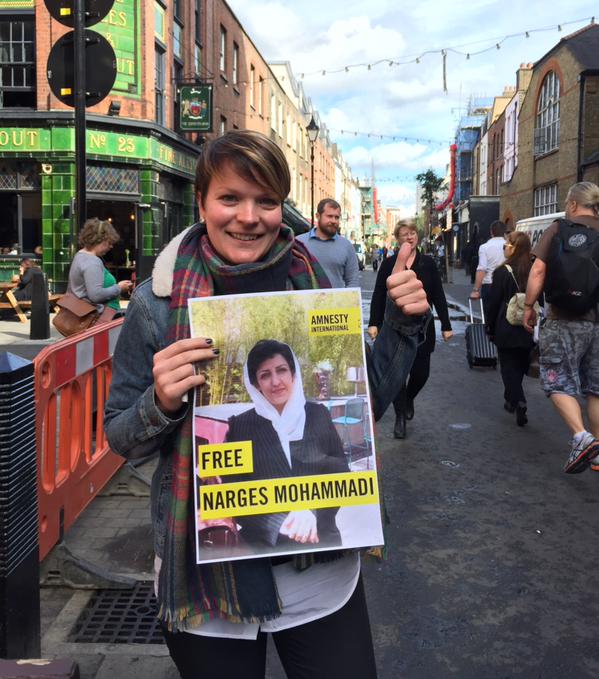 On September 21, the Revolutionary Court of Tehran sentenced imprisoned political activist Saeed Razavi Faghih to a new sentence of three and a half years. Razavi Faghih’s previous sentence ended five months ago, but he has been kept in Rajaei Shahr Prison.

On September 24, Amnesty International published a statement welcoming the investigation into the cause of death of labor activist Shahrokh Zamani in prison, and calling for the investigation to be impartial and independent. The statement also asks Iranian prison officials to improve the condition in which prisoners are kept in Iran.

On October 1, Amnesty International launched a campaign to compel the Iranian judiciary to grant prisoner of conscience Narges Mohammadi permission to speak with her lawyer and her children. Participants in this campaign signed an open letter to Sadegh Larijani, head of the Iranian judiciary, calling on him to facilitate access to urgent medical care for Mohammadi as well as contact with her lawyer and family.