On September 26, on the sidelines of his UN visit, Rouhani was interviewed by CNN’s Christiane Amanpour, who asked him about the situation of the following prisoners with dual citizenship: the Iranian-British woman Ghoncheh Ghavami, and the Iranian-Americans Jason Rezaian, Amir Hekmati, and Saeed Abedini. Rouhani denied that any journalist is imprisoned in Iran simply for being a journalist and stressed the independence of the Iranian judiciary from the presidency.

The Rouhani administration and more conservative elements of the government continue to debate the extent of censorship of digital communication tools in Iran. On October 1, Minister of Communication Mahmoud Vaezi stated that simply blocking social media will not solve the underlying issues with using them. His remarks came 12 days after the end of a month-long deadline that the judiciary had given the ministry to filter communication apps such as WhatsApp and Viber.

On September 25, Twitter CEO Dick Costolo asked Rouhani to allow Twitter access in Iran and two days later spoke with Iranian Foreign Minister Mohammad Javad Zarif about this issue. Many Iranians have since responded by calling on Twitter itself to add Iran to its list of recognized countries, using the hashtag #AddIranToTwitter.

On October 2, an official from Iran’s Department of Environment said that satellite jamming signals are carcinogenic and should be eliminated completely. He also said that a special committee has been established to investigate the effects of these signals on public health.

On September 20 and 21, security forces attacked Gonabadi Dervishes with tear gas and batons and arrested over 800 of them following an attempted protest in front of the attorney general’s offices in Tehran. The protesters had gathered to voice their anger over continued legal mistreatment of Dervishes in Iran.

On September 25, the Iran Human Rights Documentation Center (IHRDC) published a new report on the “Repression of the Arab Ethnic Minority” in Iran, finding an “atmosphere of distrust and enmity” between Ahwazi Arabs and the Iranian government.

On September 27, 18 winners of the Nobel Prize in Physics signed a letter to Ayatollah Khomeini calling for the release of Omid Kokabee, who has been in Evin Prison since January 2011 and is suffering from medical problems. Kokabee, a doctoral student at the University of Texas, says he is being held for refusing to work on military projects for the Iranian government.

Ahmed Shaheed, the UN Special Rapporteur on the situation of human rights in Iran, issued his annual report to the UN on September 26.

On September 30, Iranian officials delayed the execution of 26-year-old Reyhaneh Jabbari, who was sentenced to death for killing a man she accuses of sexually assaulting her. A day earlier, Jabbari’s mother reported that she was to be executed on the morning of the 30th, which immediately drew condemnation on social media domestically and abroad. International human rights groups, which found serious shortcomings in the investigation of her case, continue to call for her release. 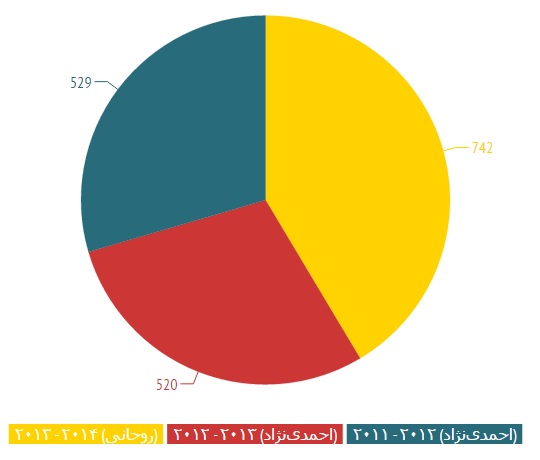 On September 24, however, Mohsen Amir Aslani was executed in Karaj’s Rajaei Shahr Prison. Amir Aslani was convicted for heresy for providing his own interpretation of the Koran, though authorities deny that his execution “was linked to his religious beliefs”.

Recently, Nabz-Iran produced and published an infographic on the “Shifting Nature of Executions” in Iran during the first year of the Rouhani and the last two years of the Mahmoud Ahmadinejad administrations, based on data from IHRDC. The infographic shows that while public executions decreased notably during Rouhani’s first year, the overall number of executions increased and that increasingly, executions happened for political charges. Nabz-Iran asked users on social media: “Does this shift in execution charges have broader meaning?”

What happens when official data is incomplete?
The Political Economy of Fiscal Decentralization under the Islamic Republic of Iran
Infographic: Comparing the death during Persian year of 1398 and previous years in Iran
Political map of Iran's parliament before and after 2020 parliamentary elections - Provinces - Pie chart
Publicly Announced Turnout Rates by Constituency for Iran’s 2020 Parliamentary Elections
END_OF_DOCUMENT_TOKEN_TO_BE_REPLACED