Recently, discussion around the level of women’s participation in political affairs has reached the headlines again. A group of women’s rights activists in Iran has launched a new campaign by the name of “Change the Masculine Face of Majles”. The goal of this campaign is to encourage women to participate in the Majles elections and to boost women’s entry into the legislative branch. Meanwhile Shahindokht Molaverdi, deputy vice president for women’s efforts, said in a speech that the low representation of women in the Majles was unbecoming of the Islamic Republic and called for more action encouraging women to participate. 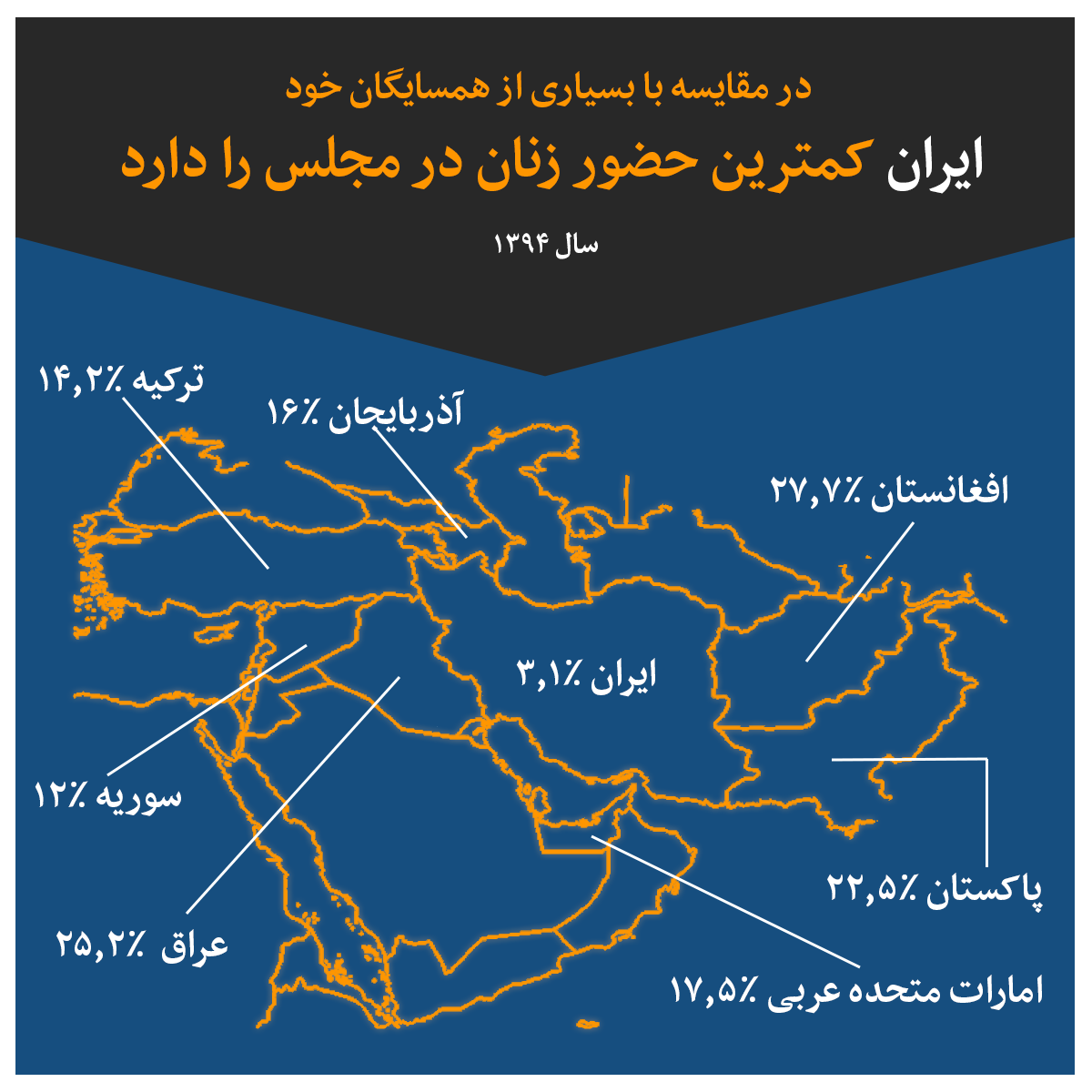 In order to evaluate the situation of women’s representation in the Iranian Majles, Nabz-Iran compared the percentage of women members of the Majles in the last four electoral cycles with the equivalent figures in Middle Eastern and North African countries. The result is a dynamic map of the region, showing that even though women’s participation in their respective countries’ legislation increased rapidly in the region over the last decade, this figure has remained at about 3% in Iran.

On October 18, President Rouhani called for increased and improved access to Internet services and social networks for Iranian users. The debate on Iranians’ free access to the Internet is one of the points of disagreement among the various factions in the Islamic Republic.

On October 20, the messaging service Telegram became inaccessible for a period in Iran, due to the company’s refusal to cooperate with the Iranian government’s request that in hand over user information. The question of Telegram’s continuing operations in Iran is still unclear.

On October 28, a report by Freedom House placed Iran at the bottom of global Internet freedom rankings, ahead only of China. The Iranian government engages in, among other practices, censorship of websites and Internet tools, monitoring and arrests of users for publishing their opinions, and restrictions on access to Internet services.

On October 24, Christian convert Mahtab Mohammadi was arrested in Tehran. Her mother and sister are also converts to Christianity, and a warrant has been issued for them as well.

On October 17, family members of political prisoners marched from Evin Prison to Parsian Hotel to protest the conditions of their imprisoned relatives.

On October 25, Amnesty International published a statement calling for attention to the situation of British-Iranian prisoner Kamal Foroughi, held in Evin Prison. The 76-year-old Foroughi is serving a 10-year sentence for the charge of espionage. Due to his physical condition, Foroughi requires medical treatment outside the prison, but authorities have not granted permission to transfer him to a hospital.

On October 29, a number of political and civic activists warned that the Iranian government is intentionally debilitating political prisoner Narges Mohammadi. Security officials transferred human rights activist Mohammadi back to prison against the recommendations of physicians at the hospital. Mohammadi suffers from various physical problems that require special medical care, and cutting her off from this care places her at risk of becoming paralyzed. She has been barred from communicating over the phone with her children for over three months, and her husband Taghi Rahmani believes that the psychological pressure exerted on her has caused her health to deteriorate further.

Ahmed Shaheed, UN Special Rapporteur on the Situation of Human Rights in Iran, published his annual report on October 28, cataloging the widespread violation of human rights, the increased number of executions, the violations of freedom of expression and women’s rights, and the suppression of opposition voices.

On October 27, the mother of Sunni prisoner of conscience Shahram Ahmadi asked to put a stop to the carrying out of her son’s death sentence. Ahmadi, who is held at Rajaei Shahr Prison, is the second member of this family to be sentenced to death; his brother Bahram was executed for his activism.