On August 28, Bijan Farhang Darehshori, one of Iran’s most experienced environmental experts, said in an interview that the most important reason for the destruction of the environment in Iran is the lack of planning and management of environmental resources on the part of the government.

On August 26, Mohammad Mohammadian, head of the Supreme Leader’s representative office in universities, announced that universities do not have the right to organize concerts. The issue of organizing concerts and their cancellation has been a contentious matter in Iran in recent months.

On August 30, Minister of Culture and Islamic Guidance Ali Jannati said in a speech that

modern communication (including satellites, the Internet, and travel abroad) is a challenge for government and society. The government of the Islamic Republic has for years considered the ingress of foreign cultures into Iran as a danger akin to cultural invasion.

On September 1, Greater Tehran Police Chief Hossein Sajedinia reported the arrests of street vendors and shopkeepers who in recent weeks had been selling T-shirts with the flags of the United States, Israel, and Britain. The signing of the nuclear agreement between Iran and global powers had led to optimism among Iranians regarding the improvement of political relations between Iran and the West.

The same day, Kurdish political activist Ali-Hossein Panahi was arrested following a speech about the violations of the rights of Kurdish citizens.

On August 24, Kurdish labor activist Nezam Sadeghi was given a discretionary sentence of one year in prison. He is a member of the coordinating committee helping to organize labor groups in the city of Sanandaj.

On August 31, political prisoner and Nationalist-Religious activist Hossein Rafiei wrote an open letter to the prosecutor general of Iran, describing Abbas Jafari Dolatabadi, prosecutor general of Iran, as the executor of the will of the security forces. For years, political observes and human rights activists in Iran have accused the judiciary and its investigators and prosecutors of a lack of independence and of deference to the security forces.

On August 20, Mohammad Ali Taheri, founder of the doctrine of Erfan-e Halgheh, began a hunger strike in prison. The Revolutionary Court has sentenced him to death on the charge of “corruption on Earth”.

On August 28, the Human Rights Defenders Association of Kurdistan reported that the life of Kurdish political prisoner Afshin Sohrabi is in danger. Despite his developing colon cancer, he is being denied medical treatment. 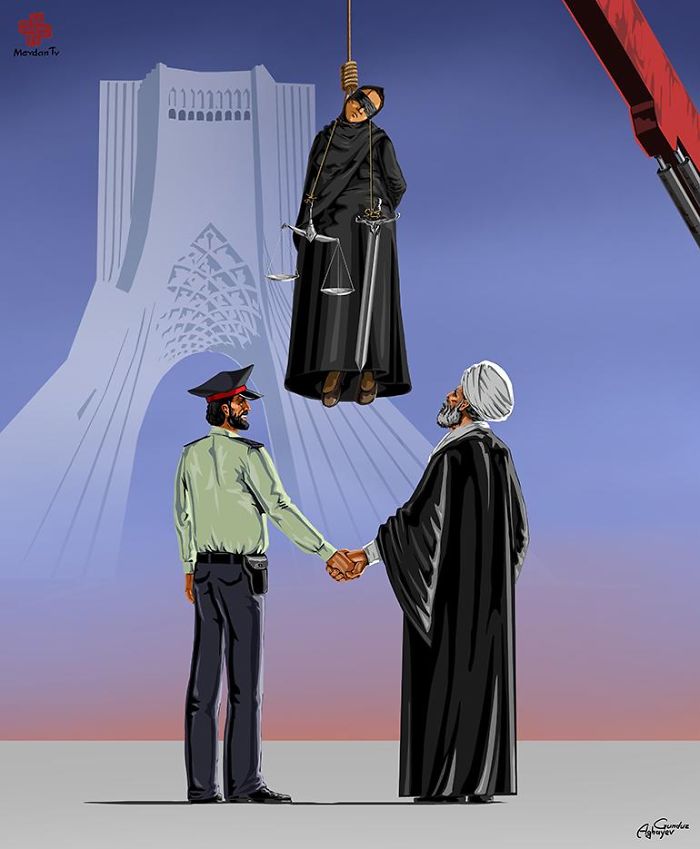 On September 2, Justice Minister Mostafa Pourmohammadi said in an interview that the house arrest of the Green Movement leaders was a political and security decision, not a judicial one, and it is therefore indefensible from a legal and judicial perspective. For a while now, political and civil activists inside and outside Iran have been seeking the release of Mousavi, Rahnavard, and Karroubi from their house arrests.

On September 4, Parliament Speaker Ali Larijani announced in an interview that the possibility exists of exchanging American prisoners in Iran for Iranian ones in the United States. Currently there are some American citizens imprisoned in Iran, the best known among them including Washington Post correspondent Jason Rezaian, former U.S. Marine Amir Hekmati, and Pastor Saeed Abedini. The manner in which these individuals have been arrested and prosecuted has drawn criticism from human rights activists across the world. Hekmati had earlier raised the possibility of such an exchange in a letter to the U.S. Secretary of State and called on him to refrain from pursuing it, since Iran is holding him hostage to exchange for Iranian prisoners abroad.

On August 26, Kurdish political prisoner Behrouz Alkhani was executed in Urmia after the Iranian Supreme Court had suspended his death sentence. The same day, five other prisoners were executed in Urmia on drug-related charges. Prison authorities are refusing to hand over Alkhani’s remains to his family.

On August 31-September 1, two prisoners were executed at the Sanandaj Central Prison.