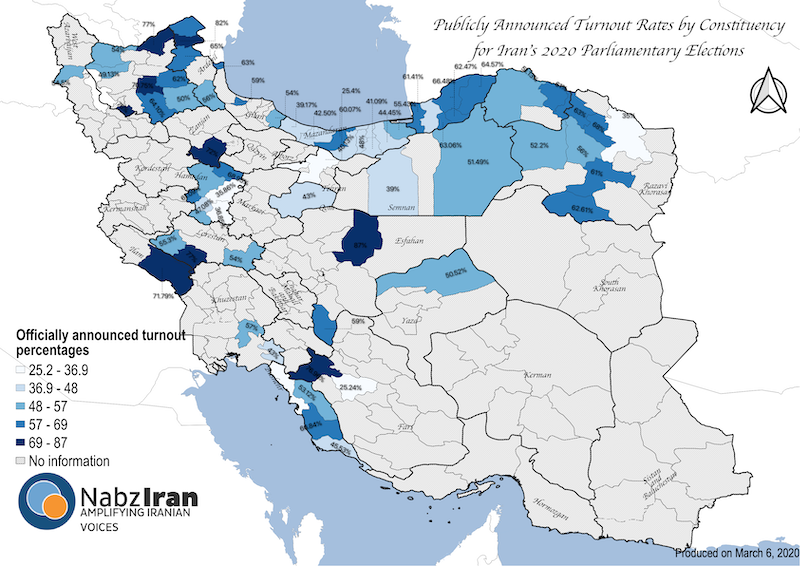 On February 21, Iran held its eleventh parliamentary elections since the Islamic revolution of 1979. Having witnessed the lowest voter turnout since the establishment of the Islamic republic (see the map of participation rates per provinces here), the government broke with tradition and did not publish the following details of the election results: voter turnout by constituency, election results by constituency, eligible voters by constituency, total number of ballots cast, and total number of valid votes. The Ministry of Interior (MOI) only published the overall turnout percentage in the country and unofficial turnout rates per province. The lack of public and verified information calls into question the validity of the results.

To determine voter turnout, the Ministry of Interior or local governors generate an estimate based on national census data and population growth rate as compared to number of votes cast. This is in contrast to other electoral systems that generate voter turnout by comparing voter registration data to the number of valid votes cast. As a result, voter turnout figures only provide an estimate rather than an exact percentage. Compounding the problem, only a portion of constituencies released turnout figures after the 2020 parliamentary elections. This map shows the available data on voter turnout by constituency.

Download the high quality version of the maps below:

What happens when official data is incomplete?
The Political Economy of Fiscal Decentralization under the Islamic Republic of Iran
Nabz Elections Central 2021
Infographic: Comparing the death during Persian year of 1398 and previous years in Iran
Political map of Iran's parliament before and after 2020 parliamentary elections - Provinces - Pie chart
END_OF_DOCUMENT_TOKEN_TO_BE_REPLACED

A glimpse at the violations during the 2021 election in Iran
What happens when official data is incomplete?
The Political Economy of Fiscal Decentralization under the Islamic Republic of Iran
Nabz Elections Central 2021
Infographic: Comparing the death during Persian year of 1398 and previous years in Iran
END_OF_DOCUMENT_TOKEN_TO_BE_REPLACED