Nabz-Iran recently received two separate reports of rights violations in West Azerbaijan province. On July 16, a report was received about the arrest of four family members, all followers of the persecuted Baha’i faith. Intelligence officials in Tabriz raided the Bahadori home, arrested the parents and both daughters, and confiscated the family’s personal affects.

The second report described the release of Salar (Michael) Turi, an activist for the rights of ethnic Azeris in Iran, after 70 days imprisonment. Turi was arrested in September 2013 (not for the first time) and was charged with “disturbing public opinion” in connection with gatherings at a Tabriz café that he manages.

On July 19, Mohammad Javad Larijani, head of Iran’s human rights council, stated that Ahmed Shaheed, the UN Special Rapporteur on the Situation of Human Rights in Iran, has made over 3000 human rights-related claims against Iran. Larijani accused Shaheed of seeking to spread anti-Iranian propaganda; the Iranian government has consistently denied Shaheed permission to visit Iran.

Four Sunni prisoners of Kurdish descent, who were condemned to death and began a hunger strike on June 13, released a joint letter recently, which was published by HRANA on July 21. In their message, the prisoners describe their deteriorating physical condition in isolation, as well as their lack of access to legal resources.

Data from Human Rights & Democracy for Iran show that flogging is used as a punishment for 148 crimes in Iran. Based on this information, Nabz-Iran categorized the 7332 floggings recorded between the years 2000-2011 into seven general categories in this infographic.

The municipality of Tehran fired a number of female employees, citing the women’s “own well-being” as the reason for their dismissal.

A recent report by Amnesty International on the “repression of students and academics in Iran” shows that, among other issues, gender discrimination has risen in Iranian universities in the period since the election of Mahmoud Ahmadinejad in 2005 to the present. New Nabz-Iran infographics visualize two of the report’s findings for the year 2012, namely that 60 Iranian universities implemented gender segregation in classrooms and that Iranian women were denied full access to 77 courses of study.

Recently, with Iran’s participation in the world championships of soccer and volleyball, the prohibition against women’s attendance at men’s sporting events in Iran reemerged as a prominent issue. A popular photo making the rounds on Facebook shows female Iranian fans at the Iranian national team’s July 20 volleyball match in Italy poking fun at Iranian television censors, who typically remove scenes of women spectators from domestic broadcasts.

On July 13, a group of 8 young Iranians arrested in July 2013 for activism on Facebook were handed prison sentences ranging from 8 to 21 years.

The Iran Human Rights Documentation Center has compiled data on executions in Iran in the first six months of 2014. Nabz-Iran published an interactive infographic detailing the 342 recorded executions in this period according to charge, gender, and city. 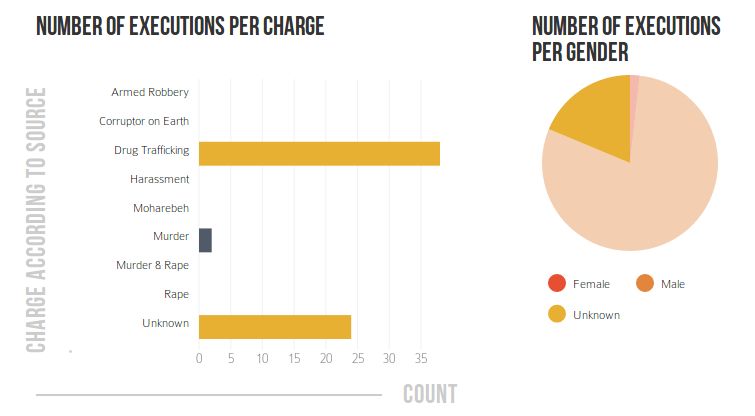 Jason Rezaian, Tehran correspondent for the Washington Post, was arrested along with his wife and two other American photojournalists on July 22. It is still not apparent why they have been detained, nor is it known which authorities made the arrests.

Saba Azarpeik, a noted pro-reform journalist, reported to the Revolutionary Court on July 20 and 21 for questioning following her arrest on May 28 and detainment in an undisclosed location.