On July 31, the mother of the imprisoned journalist Saba Azarpeik reported that authorities told her there was no hope for her daughter’s release. After 65 days in custody, Azarpeik’s temporary detainment order was extended for the third time. Azarpeik was the journalist who covered the case of Sattar Beheshti, who was killed in the custody of Iran’s cyber police. Meanwhile, Reporters without Borders expressed concern about the “extreme pressure” currently placed on her.

On August 4, the radical Lawyers’ Basij Organization, which is associated with the regime, requested the maximum penalty for Jason Rezaian, the Washington Post Tehran correspondent who was arrested on July 22. This organization told the head of the judiciary that, if Rezaian is found guilty of espionage, to apply the maximum punishment, which in this case would mean death.

On August 5, 11 prisoners died in Shahr-e-Kord from burns and asphyxiation resulting from a fire in the prison. According to reports, the fire was started intentionally by a number of individuals, but by closing the doors, prison officials did not allow rescue forces to reach the prisoners and save them.

Last week, Nabz-Iran published an infographic on the current state of political prisoners and prisoners of conscience in Iran. This infographic allows users to view the number of prisoners according to ethnicity, religion, and gender, as well as in individual prisons. The infographic is based on the latest information gathered by the website Unlock Iran. 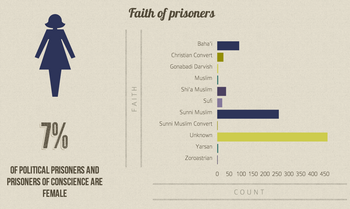 On July 28, Nabz-Iran published an infographic comparing the number of executions in Iran to previous years’ figures. According to this chart, unannounced executions from the start of 2014 through June were 17 percent higher than the previous year’s total. The chart was developed based on information gathered by the Iran Human Rights Documentation Center.

On July 29, Mostafa Tajzadeh, a member of the reformist Islamic Iran Participation Front who is currently in prison, wrote an open letter to Sadegh Amoli Larijani, head of the judiciary. In the letter, Tajzadeh asks Larijani to investigate the financial misdealings of two of the latter’s brothers. Referring to a film showing a meeting between Fazel Larijani and controversial jurist Saeed Mortazavi, Tajzadeh writes: “Law and justice command that if the tape is fake, then Mr. Ahmadinejad be prosecuted; and if it is genuine, that a court be formed to address Mr. Fazel Larijani’s bribery as soon as possible.”

August 5 marked the 108th anniversary of the Constitutional Revolution in Iran. On this occasion, Nabz-Iran asked its users on social media: “The Iranian Constitution of 1906 formally recognized the rights to freedom of assembly, expression, and private property. After more than 100 years, do you feel that you have these freedoms in your lives?”

Currently there is heated discussion around gender-based segregation in the offices of the Tehran municipality. The public relations office of the Ministry of Cooperatives, Labour, and Social Welfare denied that the ministry had requested the municipality to end its segregation. Previously, a letter from the ministry was published stating that gender-based segregation conflicts with Iran’s international commitments.

On August 3, Iran’s Press Supervisory Board found the editor-in-chief of the newspaper Aseman guilty after the newspaper was accused of “publishing content contrary to Islamic norms, blasphemy, and promoting immodesty.”

The same day, the Ministry of Information published an announcement on the shutdown of several Islamic satellite networks in various Iranian cities and the arrests of their operators. These television networks were accused of inciting division between Shia and Sunni Muslims.

On August 4, access to the news site “Tabnak” was blocked in Iran. Tabnak, which is considered close to former presidential candidate Mohsen Rezaei, was blocked by a court order following complaints by a private plaintiff.

On August 3, three Baha’i citizens named Dari Amri, Mey Khalusi, and Shayan Tafazoli were transferred to the quarantine section of Vakilabad Prison in Mashhad after one month’s detainment in the local Ministry of Intelligence facilities.

On August 5, the body of Seyed Jamal Hosseini, editor of the Human Rights Activists News Agency, was discovered at his desk in his home in Istanbul. The cause of death for the human rights activist is still undetermined.